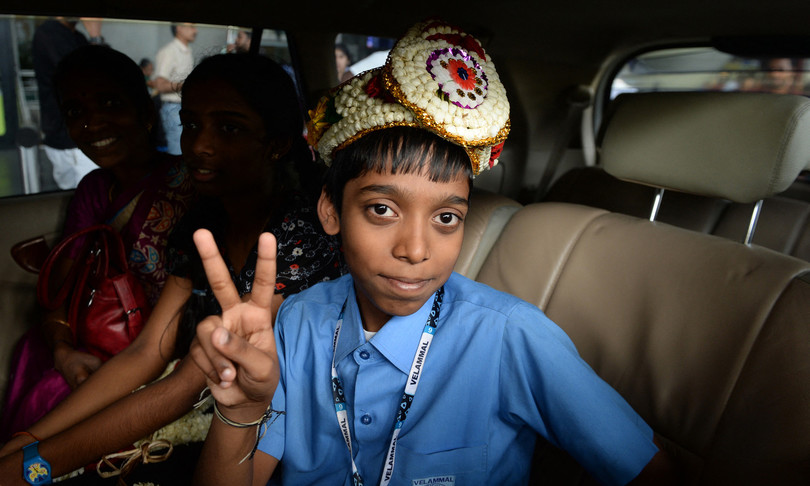 The fivefold world chess champion, 31-year-old Norwegian Magnus Carlsen, who has held the title since 2013, was defeated at the Aithings Masters by the Indian prodigy, 16-year-old Rameshbabu Praggnanandhaa. The other element of novelty contained in this news concerns the growing practice of online chess tournaments, one of the direct consequences of the Covid-19 pandemic. A practice, that of chess on the Internet, which Carlsen himself called a “revolution”.

It is no coincidence that the exploit of the one who has been nicknamed ‘Pragg’ was made right online, in one of the most followed fast tournaments in the world, making him the youngest player to av He got the better of the almost invincible Norwegian. The great Indian chess master, born on 10 August 2005 in Chennai (South), took home the victory with a queen’s gambit in the Tarrasch variant after 39 moves.

What a wonderful feeling it must be for Pragg. All of 16, and to have beaten the experienced & decorated Magnus Carlsen, and that too while playing black, is magical!

His greatest ambition is to take the place of the one who inspired him: 52-year-old Viswanathan Anand – 16th in the world rankings – called the Lucky Luke of chess at the time of his heyday for the speed with which he calculated the moves, still considered a living god of over a billion Indians. Actually ‘Pragg’, a fragile and shy-looking teenager, is no stranger to this type of exploit: in 2016, at just 10 years old, he became the youngest International Master in the history of the game. Two years later he was awarded the then-second youngest chess master in the world.

Praggnanandhaa belongs to a generation of young Indians who embody India’s growing influence in the world of chess, a sport that has its origins in a sixth-century Indian board game for two. Three of Praggnanandhaa’s peers are among the most promising players of his generation: Nihal Sarin, 18, fast chess master and 2019 Asian blitz champion, Arjun Erigaisi, 18, who five-time world champion Anand calls one of the “best. hopes “of India, and Dommaraju Gukesh, 15.

India currently has 73 great masters, up from 20 in 2007. Two of them are women, including 34-year-old Koneru Humpy, world champion in rapid chess who won the title in December 2019 after a two-month maternity break. years. Pragg is one of the most ambitious chess players of his generation. He knew chess would be his life when he was eight.

“Always think about chess,” RB Ramesh, his coach since he was 7, told BBC. The son of a bank manager and housewife, ‘Pragg’ particularly enjoys playing cricket and table tennis with his Chennai friends, as well as watching Tamil-language comedies.

Before Covid, the talented teenager spent 15 days a month traveling around the world to participate in tournaments, always accompanied by his mother and a rice cooker to prepare his favorite dishes for him as he does not like other cuisines. His sister, Vaishali, is also in the game as a member of the Indian women’s team. Precisely in Chennai in 2008 Ramesh, former Commonwealth chess champion, opened a training school today attended by a thousand students between 7 and 18 years old, both Indian and coming from the four corners of the planet.

“Indian children are highly motivated, diligent and hardworking. The main reason the game is progressing in India is that we have more qualified instructors as the great teachers and good players are becoming teachers themselves. There are so many players that there are no teachers at this point, “explained his coach. One third of students get free lessons because they can’t afford them.

India still has a long way to go before it can offer equal opportunities to all its deserving talents and realize its full chess potential. Many of its great masters do not yet have an employer and a sponsor. Oil companies and state railways have hired classified chess players, but the prize pool in tournaments is usually still below their modest salaries.

In India, the historic home of cricket, “chess fever” has now infected 50,000 Indians officially registered in clubs, but in all at least one million participate in tournaments. In 2022, in addition to hosting 12 international tournaments, Gandhi’s homeland will launch its own chess championship. In the ranking of the 100 best players in the world, the Asian giant is represented by seven champions, while the noble Russia has 23.