Bastianini triumphs in Qatar, Italian trio with Migno and Vietti 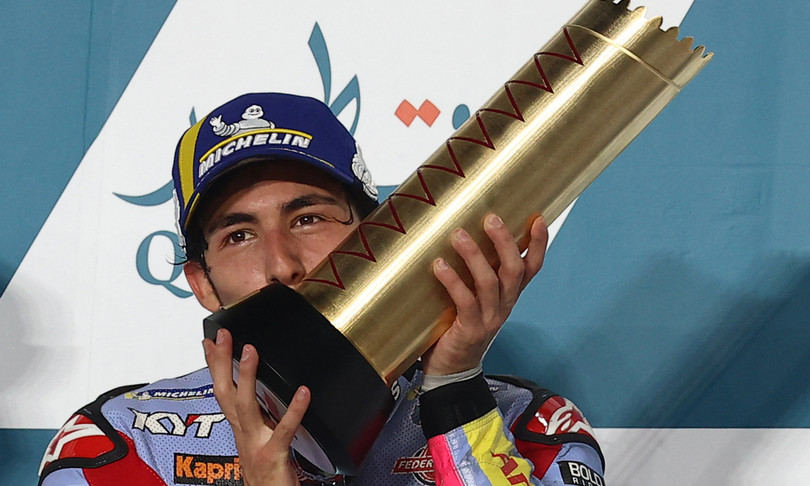 The first stage of the world championship ends with three Italian victories. From Moto3 with Andrea Migno, passing through Moto2 with Celestino Vietti to MotoGP with a historic Enea Bastianini.

The 24-year-old from Rimini on Ducati Gresini achieved his first top-class success in front of Brad Binder and Pol Espargaro, leading a comeback race, without overdoing it and taking advantage of his opponents’ small flaws.

The dedication, after an intense embrace with Nadia Padovani, could only go to the late Fausto Gresini, the one who created the team now in the hands of his wife: “It’s difficult to explain what is going through our minds, I would have liked to share this victory with him. We made our dream of arriving in MotoGP come true, but unfortunately we got there without him. This is not the time to be sad, just to thank and honor him “, explained Enea.

Unexpected names on the podium, starting with South African Brad Binder: “It’s crazy to be on the podium in Losail for us, in the future I expect more results like this at this point.”

While Espargaro raised his voice after he was often sidelined, overshadowed by the bulky figure of Marc Marquez: “Like all of us we had fuel problems, but the times came easily. Maybe I exaggerated a little bit on a curve, but we’re back. This is the sign that Honda has two strong riders, not just one. ”

Marquez himself is satisfied in the middle of a fifth place followed by the morning crash in the warm-up: “Today we didn’t have speed, there were stronger riders who finished up front. The race was good, however, because I always struggled here. We went very fast from the start and I immediately wore the tires. it is important that I am well “.

The most disappointing are Francesco Bagnaia and Fabio Quartararo, two of the favorites on the eve. ‘Pecco’ crashed together with poleman Jorge Martin in the middle of the race, while the Frenchman collected an opaque ninth place: “It’s very difficult, we have so many problems. It was a disaster, but I gave my 100% and I can’t do it. more. When you don’t have grip it’s complicated “, the Yamaha centaur vented

Previously, Qatar had already dyed blue with Migno’s success in Moto3able to prevail at the photo finish on Sergio Garcia.

Then the affirmation in Moto2 of Celestino Vietti, who makes Valentino Rossi smile with the first success in the category and above all of the newborn Team Mooney VR46.