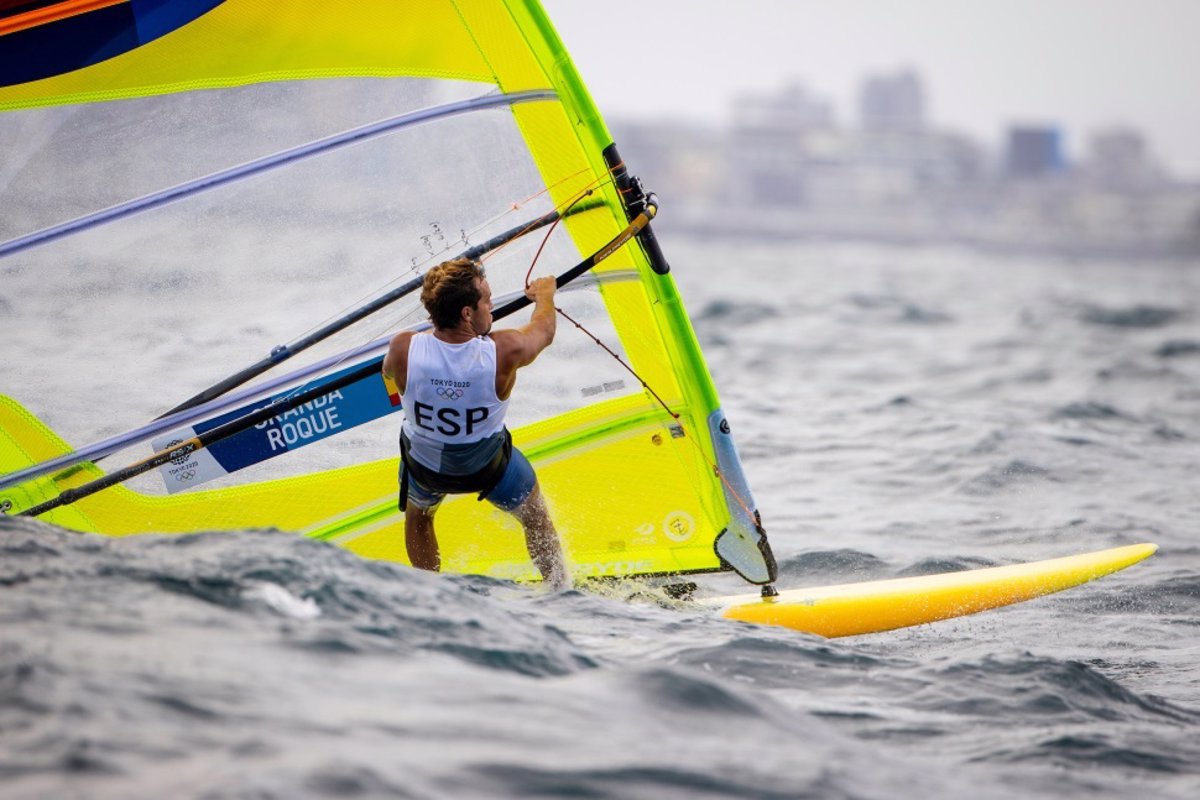 The fifth day of sailing at the Tokyo 2020 Olympic Games has been positive for the Spanish delegation, with Ángel Granda getting into the ‘Medal Race’ in the RS: X class while there are two provisional silvers, those of Botín and López Marra in 49er and Joan Cardona’s in Finn.

The regattas in Sagami Bay continue to advance and Spain is making steady progress. This Thursday, with milder winds of between 10 and 15 knots, the Canarian windsurfer Ángel Granda sealed the first pass of the Spanish delegation to a ‘Medal Race’ in RS: X.

“Seeing the wind that was there today, the objective was to enter the ‘Medal Race’. I had good starts today. A shame in the first regatta that I have opted to go right after seeing that the girls were all there with good wind And it was not like that for me. But in the second and third I was quite good tactically. I felt comfortable sailing and had good speed, “commented Granda.

With a forecast of weaker winds still for Saturday, Ángel Granda is clear that he will go for it. “In the Medal Race there will be less wind so the objective is to win it,” said the canary, who with less weight than his rivals suffers when there is more wind.

In addition to that possible fight for the medal of Granda, who is tenth in his category, at the moment there are two provisional silvers with Diego Botín and Iago López Marra tied on points in the 49er series with gold after a 5. (12).

For her part, Joan Cardona is one point behind the precious metal of gold in Finn. He has four of the ten scheduled races left, and the Spaniard remained consistent in the two races disputed, adding a 2.3 to stay on the provisional podium.

On the other hand, Tara Pacheco and Florian Trittel threw speed in the stern today, their strong point, to move up one place in the Nacra 17 table and place sixth tied with fifth. The objective now for the Canarian.Catalan duo is to improve the starts to be ahead from the beginning in a fleet that sails very compact.

An eighth and a fifth place in the sleeves this Thursday put Jordi Xammar and Nico Rodríguez in seventh place overall in 470 Men, losing the provisional third position they had after a difficult day. And on the penultimate day of regattas for the Laser Standard class, the Canarian Joel Rodríguez fulfilled his objective of being more aggressive and with a 9.10 he scratched three places in the table to place 15th.

As for female participation, Blanca Manchón stayed at the gates of the ‘Top 10’, in eleventh place. In its second Games, after those of Atlanta 1996, it was only one place away from getting into the RS: X Women’s ‘Medal Race’, despite going back two places in the classification.

The Catalan Silvia Mas and the Canarian Patricia Cantero did two good regattas in the 470 Women. Analyzing the errors has led them to risk a little more in the starts and try to get their heads out as soon as possible, reaping a 3.6 that makes them recover no less than nine positions until the seventh of the provisional. In Laser Radial, the Catalan Cristina Pujol closes the day in 25th place after a 30. (33).