The historic feat of the swimming blues 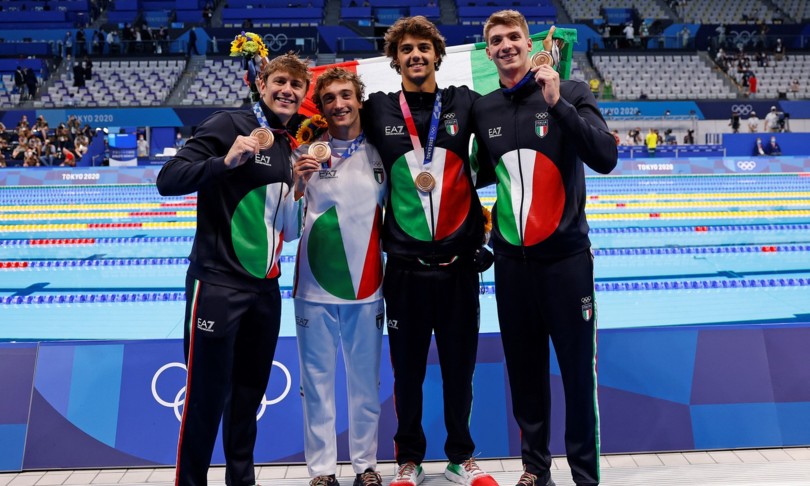 ` – The Italy of swimming in the pool wins six medals. The last was the bronze medal of the 4×100 medley which was the protagonist with its champions Thomas Ceccon, Nicolò Martinenghi, Federico Burdisso and Alessandro Miressi, of a stellar, spectacular race, the fastest in history with the United States dragged by an irrepressible Caeleb Dressel, the superlative number one in swimming at men at the Tokyo Olympics, to the world record.

The last day was characterized bybitter fourth place of the expected Gregorio Paltrinieri on the 1500 freestyle in which he had to give the scepter of ‘King’ to another Us Boys, the young talent from Tampa, ‘Bobby’ Finke, gold also on the 800 where SuperGreg had won the silver proving to have defeated the recent mononucleosis that had affected him.

The blue medal table opened with the bronze in the 100 breaststroke of Nicolò ‘Tete’ Martinenghi, then the silver of the 4×100 freestyle (Ceccon, Manuel Frigo, Miressi and Zazzeri), the bronze of Federico Burdisso in the 200 butterfly in the moving day of farewell of the ‘Divine’ Federica Pellegrini from the Olympics. Simona Quadarella, also like Paltrinieri, a great protagonist in Europe and in the world of long distances, returns to Italy with a bronze in the 800s.

The final of the Olympics for Italy was tinged with bronze as it had begun. An excellent balance that, in the number of medals, equals that of Sydney 2000 when, however, there were also two gold medals with Domenico Fioravanti in the breaststroke and Massimiliano Rosolino in the 200 medley.

The 4×100 mixed relay, a race that measures the compactness and power of a national movement, is third with a lot of new Italian record, 3’29 “17 which improves that 3’29” 93 swam by the same quartet last May 23 at the European Championships in Budapest.

Stellar in the true sense of the word were the Americans Ryan Murphy, Micheal Andrew, Caeleb Dressel and Zach Apple who finished in 3’26 “78, a new world record that still went back to the rubberized swimsuits of 3’27” 28 (2 August 2009 at the World Championships in Rome). Silver to Great Britain by Luke Greenbank, Adam Peaty, James Guy and Duncan Scott with a European record of 3’27 “51.

To open the blue relay is Thomas Ceccon who after the backstroke swam in 52 “52 (improved national record) touches in second place to Nicolò Martinenghi. ‘Tete’ in the breaststroke opens the gas as he knows how to do and remains second behind the champion Adam Peaty. The USA are third but in the third fraction, the butterfly, they launch the Caeleb Dressel torpedo with Burdisso who changes to third place with Miressi who does not yields in the final of the freestyle to the dangerous return of the unleashed Russian Kliment Kolesnikov.

Italy is bronze, a historic medal, the third ever at the Olympic relay level. Before the two in Tokyo in the Italian roll of honor there was only the bronze of the 4×200 in Athens 2004 with Emiliano Brembilla, Massimiliano Rosolino, Simone Cercato and Filippo Magnini.