Jacobs and Tamberi on the roof of the world, two historic gold medals in the 100 meters and above 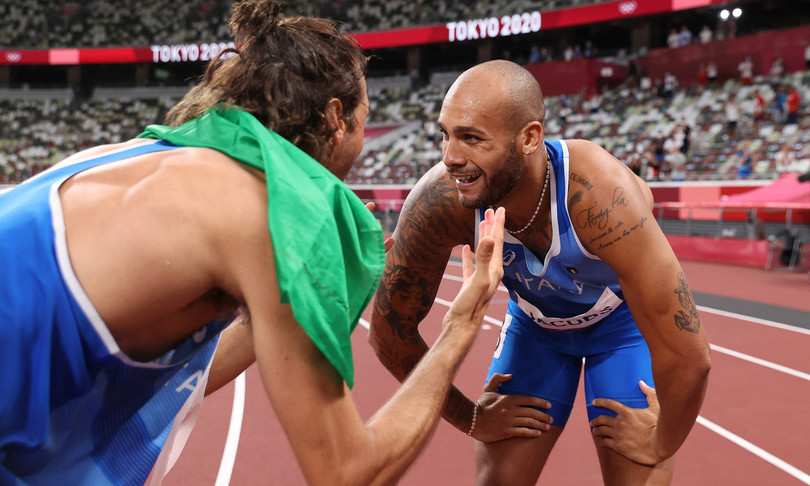 ` – Marcell and Gimbo, ‘brothers of Italy’ united in legend. A thunder, Marcell Jacobs, who flies beyond the imaginary on 100 meters and prints a phenomenal time of 9 seconds and 80 cents, a helicopter, Gianmarco Tamberi, who conquers the gold dreamed every night for five years in the company of a friend , Mutaz Barshim. In just 11 minutes Tamberi and Jacobs wrote the history of Italian sport in the sport ‘Queen of the Olympics’, athletics.

Marcell, an Italian from Desenzano del Garda, is the new 100-meter Olympic champion and in the roll of honor follows an extraterrestrial, Usain Bolt, the ‘lightning bolt’ who had won the Games from London 2012 to Rio 2016 via Beijing 2008 and who in his life was able to become a spaceship by entering orbit in 9 “58.

Jacobs, the big guy all muscles, tattoos and with a bit of Texan blood because of his father Lamont Marines with whom he has reconnected only recently, and a bit from Brescia, his mother Viviana, in two hours he first upset the history of the 100 meters in Europe and then also the world one. In half a century, 49 years old, only three Europeans won the ‘Queen’ of athletics: the Soviet Valery Borzov in Munich ’72 and the British Allan Wells and Lindford Christie in Moscow ’80 and Barcelona ’92 respectively.

In history no Italian had played an Olympic final. Marcell Lamont Jacobs has not only won but has scrambled and upset his opponents. In the semifinals he was still a bit humane but he had placed a 9 ”84 which canceled out an old expert of 100 meters, the Portuguese, Nigerian by origin, Francis Obikwelu who for almost 17 years had held the European record.

The blue entered the final with the third fastest time less than a cent from the Chinese Bingtian Su, the Asian record with 9 “83 (.827 thousandths) and from the American Ronnie Baker with 9” 83 (.829). In the final, the standard bearer of the Fiamme Oro is a missile and is further improved, 9 ”90. Silver to the usual American on duty, this time Fred Kerley (9 “84), bronze to the Canadian Andre De Grasse (9” 89).

Tamberi had thought about inflaming the evening. Five years ago he went to Rio de Janiero with his leg in plaster due to the fracture in his foot remedied in Monte Carlo. Well, Gianmarco brought a piece of that pinstriped fiberglass knee-high to the platform in Tokyo. Almost like a trophy. Gimbo’s gold is the gold of friendship, of fraternity, a gold shared with the rival-friend of many challenges, Mutaz Barshim of Qatar. They found themselves alone at the same size, 2.37, they looked into each other’s eyes and understood: “our race ends here”.

But how? Of course, the regulation allows it that when you are at the same size you can choose whether to go ahead with the playoff or share that same color of medal. Gimbo and Mutaz, united by the high jump but also by bad luck – Barshim broke his foot three years ago and Tamberi five – also for this reason they became very close friends.

For Italy of the high jump it is the second Olympic gold after that of Sara Simeoni in Moscow in 1980. But there is more. It is not the first time that Italian athletics has won an Olympic gold medal (now there are 21 in total) on the same day. The precedent was signed by Alessandro Andrei and Gabriella Dorio on the afternoon of Saturday 11 August 1984 at the Memorial Coliseum stadium in Los Angeles.

The Tuscan pitcher won the shot put while the Venetian middle-distance runner won the 1500 meters. The last gold won by an Italian at the Olympics was that of Alex Schwazer on 22 August 2008 in Beijing in the 50 km walk, a sector historically a forge of medals for Italy.