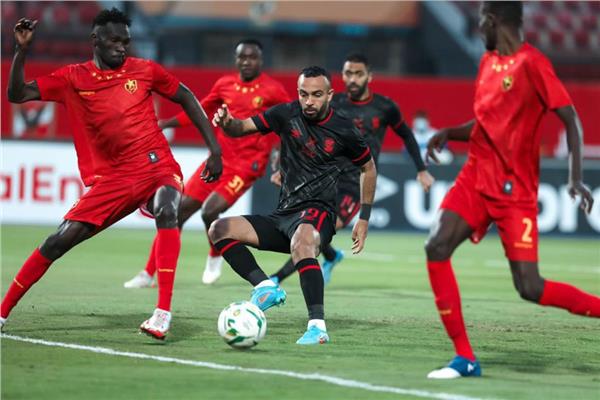 The first football team of Al-Ahly club achieved an important victory over Sudan’s Al-Merreikh by three goals to one in the match that was held between them today at Al-Ahly and Al-Salam Stadium, in the fifth round of the group stage of the African Champions League.

Al-Ahly’s hat-trick was scored by Percy Tau, Mohamed Sherif and Ahmed Abdelkader, while Ramadan Ajab scored the only goal for Al-Marikh.

Al-Ahly raised its score to 7 points, while Al-Marikh’s balance froze at 4 points, and the Sudanese champion bid farewell to the championship with this loss, even if he won the last round, and Al-Hilal remains a competitor to Al-Ahly for the second card.

Al-Ahly goalkeeper, Mohamed El-Shennawy, blocked the most dangerous opportunity for the Sudanese team, Al-Merreikh, in the 52nd minute of the match at Al-Ahly and Al-Salam Stadium, in the fifth round of the group stage of the African Champions League.

The last minutes before the end of the match whistle witnessed a clash between the players of the two teams, before the situation was contained and the remaining minutes resumed.

Al-Ahly started the match with enthusiasm in order to score an early goal, and Al-Marikh tried to organize its ranks in the middle of the field, relying on the launches of the three attackers.

Percy Tau scored Al-Ahly’s goal in the 19th minute of the first half, and Al-Ahly tried to consolidate the progress, and Mohamed Sharif and Hussein Al-Shahat missed opportunities to score the second goal.

Al-Ahly controlled the course of matters in the match, and Mars tried at intervals, and the crossbar countered a dangerous opportunity from Mars, and Al-Ahly players missed more than one opportunity to increase the balance of goals.

The formation of Al-Ahly was as follows:

The formation of the Sudanese Mars was as follows..