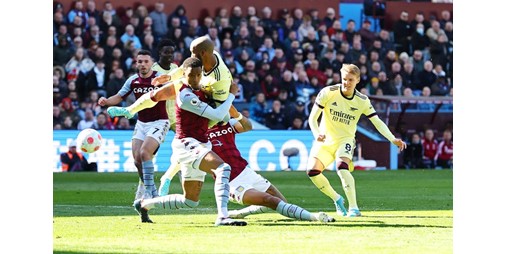 Arsenal boosted their chances of qualifying for the Champions League next season after their important victory over Aston Villa with a clean goal yesterday in the 30th stage of the English Premier League football.

The Gunners owe this victory to Bukayo Saka, who scored the game’s only goal in the 30th minute, and thus the team regained its balance after falling in the last stage against Liverpool 0-2 after a series of distinguished results.

Arsenal raised its score to 54 points in fourth place, while Aston Villa’s balance stopped at 36 points in ninth place.

At the opening stage, Leeds United came from behind with two clean goals against its host Wolverhampton to a precious 3-2 victory at Molyneux Stadium.

Wolverhampton advanced with two goals in the 26th and 45th minutes through Johnny Castro and Francisco Trincao. Rodrigo, 66, Luke Ayling, 90.

The win raised Leeds’ tally to 29 points in 16th place, while Wolverhampton’s tally froze at 46 points in eighth place.

And in the FA Cup, both Liverpool and Man City will preserve their hopes of achieving the quartet and the treble, respectively, this season, when the first comes against Nottingham Forest and the second against Southampton in the quarter-finals.