City and Reds in the Cup semi – finals 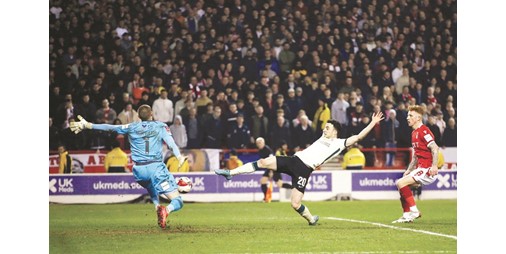 Man City scored four goals against Southampton (4-1) to reach the semi-finals of the FA Cup, and accompanied them to the same round, their counterpart Liverpool, by defeating Nottingham Forest from “Championship” 1-0, and Chelsea was the first to qualify by defeating Middlesbrough 2- 0 on Saturday, in addition to Crystal Palace, who beat Everton 4-0 in the quarter-finals on Sunday. The draw for the semi-finals was drawn and resulted in a heavy-caliber confrontation between “City” and Liverpool on April 16 or 17, a week after the expected confrontation between them in the league, and the second match between Crystal Palace and Chelsea. In addition, Tottenham entered the struggle to qualify for the European Champions League by defeating its guest West Ham 3-1 in the London derby on Sunday, in the 30th stage of the English Premier League. In another match, Leicester beat its guest Brentford 2-1.

Juventus rose from its continental stumble and is one point away from the third Inter after beating Salernitana 2-0 in the 30th stage of the Italian Football Championship on Sunday, which saw Roma win the capital’s derby 3-0 against Lazio. In two other matches, Venezia fell at home to Sampdoria 0-2, and Empoli drew 1-1 with Verona.

In addition, Borussia Dortmund failed to restore the four-point difference with leaders Bayern Munich by just one point from its guest Cologne, with a 1-1 draw at the end of the 27th stage of the German Football Championship on Sunday. Dortmund raised its score to 57 points, compared to 63 for Bayern Munich. Leverkusen consolidated its third position by returning a winner from Wolfsburg 2-0, and Leipzig fell to a goalless draw at home against Eintracht Frankfurt.