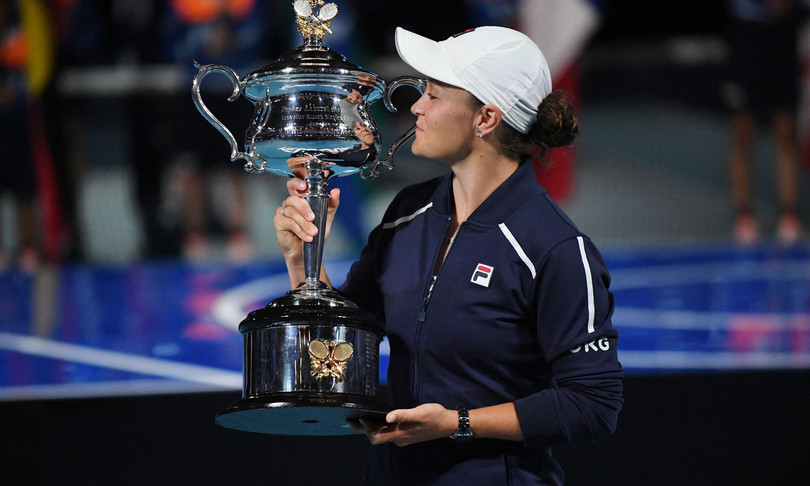 The coincidence is “uluru” which in an aboriginal language means “strange”: about twenty days before the announcement of her retirement, Ashleigh Barty, for all Ash, the Australian number 1 who sensationally announced her retirement from tennis , was in Ayers Rock, the colossal red monolith in the heart of Australia. Whose original name is precisely “Uluru”, “strange“.

Like the sudden choice that the tennis player communicated with a video on Instagram: to leave the sport that gave you wealth and glory one month after her 26 years “to pursue other dreams”. The same word (“dream”) with which Ash had commented on her visit to Ayers Rock and which she also used to justify her decision: “Now is the time for me to pursue other dreams”.

And just to close the circle: Ayers Rock is full of a symbolism that in the mythology of the place refers to the era of dreams. And in hindsight, the “strangeness” of her decision (net of physical or psychological reasons which she did not mention) is such only if you look at the life of a 26-year-old girl with a logic that is only competitive or just commercial.

Changing perspective and thinking instead of a sensitive and intelligent young woman who feels an irrepressible desire to live and breathe the pure air of the Australian outback without having to run away to train (or train by running), then a different light falls on the story. , not a shadow. That Barty was endowed with a sensitivity perhaps bordering on frailty was well known.

After all, a slice backhand like his so effective, deep, sharp as a blade, could only arise from a personality made up of subtleties more than just power or resilience to the opponent’s game. At 17, in 2014, he gave up everything. She was already an excellent doubler. For seventeen months she did other things, she invented herself a professional cricket, just like Michael Jordan turned to baseball when he decided to leave the Bulls and Michael Schumacher tried his hand at Superbike after leaving Ferrari and F1.

Her then coach Jason Stoltenberg (the one who had lost the Wimbledon junior final to Diego Nargiso in ’87 and then was Lleyton Hewitt’s coach) said he had seen her drained, depressed. But like Jordan and Shumy he returned to his original circus, tennis, a year and a half later. Guided and advised by Casey Dell’Acqua, her compatriot tennis player to whom she entrusted her decision on video.

The symptoms that led her to this may have been evident in 2020, before the pandemic blocked the world, when after a defeat in the semi-final in Melbourne Ash showed up at a press conference with his granddaughter in his arms. Was it an attempt to give an image to what she had repeatedly reiterated? That tennis was a way of life but not the criterion that guides life? She evidently she was. Maybe.

And Barty is certainly not alone: ​​Borg retired from tennis asphyxiation at the age of 26 and tried again years later with a saint in the stands: it didn’t end well. Justine Henin also gave up everything at 26, a year after the painful separation from her husband. She returned after a couple of years in time to hurt her elbow and disappear for good.

Tracy Austin on permanently stopped by a shattered back at the age of 21; Anna Kournikova understood at 22 that it would be better for her to exploit her brand without playing tennis (especially since her back prevented her from doing so), the Belgian Kim Clijster, former world number one too, won by injuries retired for the first time in 24 years old, returning three years later, to go back all to 29 and make an appearance the following year.

Ash, as far as it turns out, is fine. But he obviously wants to enjoy the subtle pleasure that comes from changing one’s life at some point. It cannot be excluded that in the near future Naomi Osaka will also take the same path, who knows. She too badly processes the stress of being a leader, a stress that breaks the soul and not the ribs as in the case of Nadal.

Ashleigh Barty leaves tennis after winning three Grand Slam titles (Roland Garros, Wimbledon and the Australian Open this year), a Finals title and 121 weeks at the top of the WTA rankings. She who knows if she will come back. But for now she wants to live her dreams. And if you train eight hours a day of time to dream (when awake) there is little left.