African qualifiers for the 2022 World Cup Arab superiority in 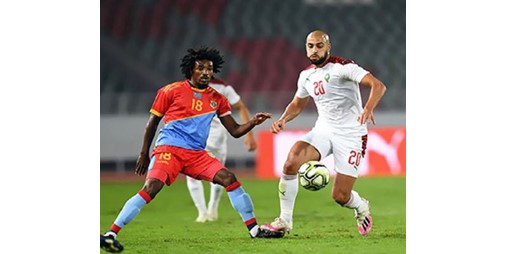 Algeria, Tunisia and Egypt made great strides towards qualifying for the World Cup Qatar 2022, by defeating Cameroon, Mali and Senegal, respectively, with the same result 1-0 on Friday, in the first leg of the decisive third round of the African qualifiers, which witnessed a difficult and valuable tie for the Moroccan team against its host, DR Congo 1-1 .

The “Desert Warriors” returned with a deserved victory from Cameroon, with the goal of Lyon French striker Islam Slimani (40).
The Algerian team needs to draw at least in the second leg at the “5 July” stadium next Tuesday to reach its fifth finals after 1982, 1986, 2010 and 2014, when it reached the final price and was eliminated by Germany, which later crowned the title.
The Algerian entered the Jaboma stadium, which hosted his three matches in the group stage of the last African Nations Cup, which he bid farewell to with the title from the first round.
This is the tenth match between the two teams in history, where the Greens scored their second victory against six losses and two draws, and the first Algerian victory dates back to November 1995 with a 4-0 friendly result.

Thus, Soleimani consolidated his score as the best scorer in the history of the “Greens”, with 40 goals in 84 international matches.

– Egypt avenged Senegal – and the “Pharaohs” avenged their loss in the African Nations Cup final against Senegal, by defeating them with a clean goal.

In front of more than 75,000 spectators at the Cairo International Stadium, Egypt won with a reverse goal from Senegalese defender Salio Cisse in the fourth minute.

Thus, the Egyptian national team will be the top player in the return match at the Diaminiadio stadium in the capital, Dakar.

The “Pharaohs” started the match with a compressive attack that resulted in an early goal in the fourth minute, after Amr Al-Sulayya passed into the depth of Senegal’s defense to Liverpool’s English star Mohamed Salah.
Despite the attempts of the “Teranga Lions” in pursuit of a tie, especially through the attempts of the duo Bona Sar, Ismaila Sarr and Sadio Mane, the Egyptian team managed to maintain this progress until the end of the match.

– Mali renders a service to Tunisia – In a second match at the “March 26” stadium in the capital, Bamako, the Tunisian team avenged its 0-1 defeat against Mali in the group stage competitions of the African Nations Cup in Cameroon two months ago.

Tunisia beat its host with a clean reverse goal from Moussa Sissako (36), who quickly received a red card after four minutes to provide a service on a silver plate to the “Carthage Eagles”.
Although the Malian team had more possession of the ball and was the most dangerous, the Belgian defender Standard Liege’s mistake reshuffled coach Mohamed Magasoba’s cards.

Mali seemed unaffected by the expulsion situation in the second half and threatened Tunisia’s goal more than once in search of the equalizer without realizing it.

The first chance for the owners of the land came through a shot from the left side inside the area from the Emirati Al-Jazira player Abdoulaye Diaby, taken by goalkeeper Bashir bin Saeed (17), before the “Carthage Eagles” responded with a launch from the middle of the field to reach the ball to Muhammad Ali bin Ramadan, who shot from an angle A difficult challenge was stopped by goalkeeper Ibrahim Monkoro, while the Qatari striker Youssef Al-Maskani was waiting inside the area (32).

The guests opened the scoring through friendly fire after an exchange of balls between the defenders. They reached defender Sisako, who returned them strongly to his goalkeeper Ibrahim Monkoro, and scored the net (36).

No sooner had Sisako woke up from the first slap than the referee sent him off after four minutes with a red card after a mistake he made against Egyptian Zamalek striker Seif El-Din El-Jaziri, who was heading to the goalkeeper, leaving his team to play the rest of the match with ten players.

Consequently, Tunisia returned with a precious victory before the return match at the Hamadi Al-Akrabi Stadium in Rades next Wednesday.

– A precious draw for Morocco – The Moroccan team grabbed a difficult and valuable draw at the same time against its host, the Democratic Republic of the Congo, 1-1, Friday, at the “Al-Shuhada” stadium in Kinshasa.

Yuan Wesa opened the scoring for the “Panthers” (12), and substitute Tariq Tisoudali equalized for the “Atlas Lions” (77).
The match witnessed a penalty kick that Hungarian player Franzváros, Ryan Mayi missed for Morocco in the first half, while the host team continued the match with ten players after Glody Ngonda was sent off for receiving a second warning after a harsh intervention on Ashraf Hakimi (86).

The two teams will meet again next Tuesday at the “Mohammed V” stadium in the economic capital of Morocco, Casablanca, where the preference will be relative to the “Atlas Lions”, as they need to draw a negative or win any result to reserve their place in the Qatar finals, and qualify for the international football wedding for the sixth time in its history.

As for the Democratic Republic of Congo, it needs to win exclusively to qualify for the second time in its history, after it fought in the 1974 World Cup in Germany under the name Zaire.
This is the second tie in the four confrontations historically between the two teams, with each winning on one occasion.

The Bosnian-French coach of Morocco Wahid Halilhodzic started the match with a cautious squad, while Argentine coach Hector Cuper, coach of the “Panthers” team, relied on the French Marseille player, captain Cedric Bakambu, and Kuwaiti player Diomercy Mbokani in attack.
After the match, Halilhodzic saw that his players gave a strong performance, especially in the second half.

“We started the match well, but the team shook and lost focus and the ball after the Congolese team opened the scoring,” he said.

He added, “We still have the return leg and we have not qualified yet. A more difficult match awaits us in Casablanca, where the opponent team, which confirmed that it is difficult to manage, should not be underestimated, and therefore we must present a big match to achieve qualification.”
The coach congratulated the players on their performance, saying, “We achieved a positive result, but a difficult battle awaits us in Morocco, and the meeting will not be easy.”

On the other hand, the meeting of host Ghana ended in a goalless draw against Nigeria, to be the decisive decision in the second leg.