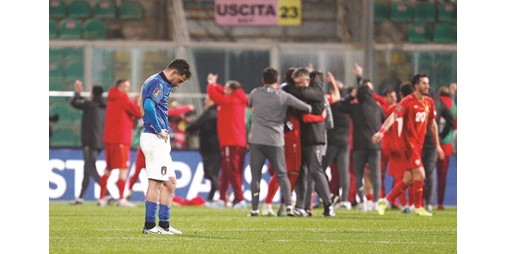 Eight months after winning the European Championship and honoring him at the highest levels in Italy, the legend of the “Azzori” was shattered, to miss the World Cup finals for the second time in a row.

“To hell,” the Corriere dello Sport daily said on its front page, summarizing the Italians’ feelings after their team’s 1-0 home loss to North Macedonia was forced to miss the finals in Qatar later this year.

Italy coach Roberto Mancini called on his compatriots to raise their heads after the failure of “Squadra Azzurra” to qualify for the second time in a row for the World Cup finals, without directly talking about his future.

“Let’s take the time to think and understand clearly,” Mancini wrote in a social media post with a photo of him. The only thing that can be done is to raise heads and work for the future.”

“Last summer, we were at the top of Europe after completing one of the most beautiful journeys in the history of the national team. A few hours ago we woke up in one of the worst situations.”

Mancini said that the sudden loss of the European Cup holder against North Macedonia in the last moments of the European play-off semi-final last Thursday is “difficult to accept, but accepting losses is part of human sporting growth.” Mancini, 57, was asked last Thursday in Palermo if he would continue his duties, but he answered briefly: “We’ll see.” Italy drank the same cup that it drank from four years ago to move away from the most prestigious world championship for the first time since 1958, but after Italy’s victory over England in the European Championship final last July, few people believed that a repeat of the disaster was on the horizon. “It is a resounding scandal,” wrote El Messaggero newspaper. The shame is worse than ever.” Italy have won the World Cup four times, most recently in 2006. But they were eliminated from the group stage in 2010 and 2014 and the latest setback suggests that European victory in 2021 was just a fleeting bright moment in a long period of decline.

“What can I say?” said Carlo de Marchi, who lives in Rome. We had a lot of luck in the European Championship and we paid for it. It is that simple.” As in 2018, Italy was the only former champion who did not reach the World Cup finals and newspapers saw this exclusion as a reflection of broader problems in Italian football.

“The system, the whole Italian football, needs a trial,” Italy’s best-selling sports daily Gazzetta dello Sport wrote in an editorial, blaming a “total lack of vision” among those responsible for the game in the country. And the surprise was achieved by North Macedonia, with a goal scored by the Saudi Al-Fayha striker, Alexander Trajkovsky, in the deadly time (2 + 90), to give his country the card of the third track final of the European qualifying play-off for the Qatar 2022 World Cup, where it will meet on Tuesday with Portugal, which won Turkey 3-1 in Porto. Gareth Bale scored two great goals to lead Wales to a 2-1 victory over Austria in the European play-off semi-final, and Wales meet in the final of this winning track in the Scotland-Ukraine match, which was postponed to June.

Sweden reached the final of the second track with a hard victory over its guest Czech 1-0 after an extension in Solna, to face Poland, which qualified directly for Tuesday’s match as a result of Russia’s exclusion against the backdrop of its crisis with Ukraine.