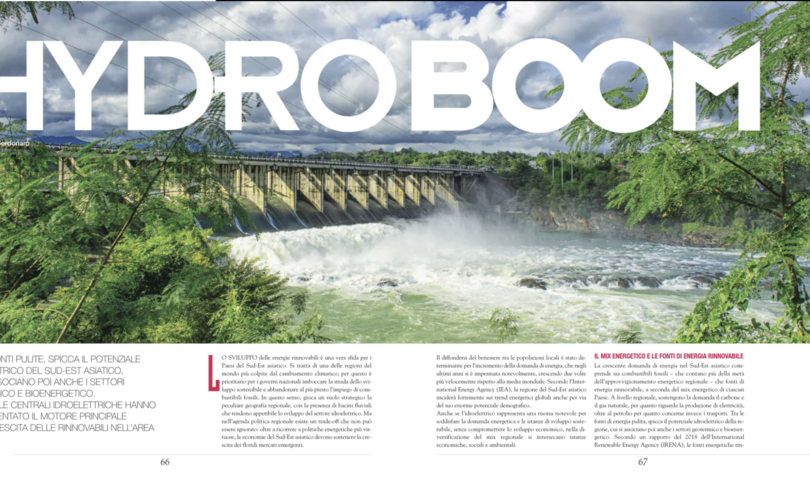 The development of renewable energies is a real challenge for the countries of Southeast Asia. It is one of the regions of the world most affected by climate change; for this reason it is a priority for national governments to take the path of sustainable development and to abandon the use of fossil fuels as soon as possible. In this sense, the peculiar regional geography plays a strategic role, with the presence of river basins that make the development of the hydroelectric sector attractive. But there is a trade-off on the regional political agenda that cannot be ignored: in addition to resorting to more virtuous energy policies, the economies of Southeast Asia must support the growth of thriving emerging markets.

The spread of well-being among the local populations has been decisive for the increase in energy demand, which in recent years has significantly increased, growing twice as fast as the world average. According to the International Energy Agency (IEA), the Southeast Asian region will have a strong impact on global energy trends also due to its enormous demographic potential.

Even if hydroelectricity represents a significant resource for satisfying energy demand and sustainable development needs, without compromising economic development, economic, social and environmental issues intersect in the diversification of the regional mix.

The growing demand for energy in Southeast Asia includes both fossil fuels – which account for more than half of the regional energy supply – and renewable energy sources, depending on each country’s energy mix. At the regional level, coal and natural gas support demand for electricity generation, as well as oil for transport. Among the sources of clean energy, the hydroelectric potential of the region stands out, together with the geothermal and bioenergy sectors. According to a 2018 report by the International Renewable Energy Agency (IRENA), renewable energy sources in 2015 accounted for 17 percent of the region’s total electricity production, with hydroelectricity as the leading sector (over three-quarters of the energy produced ). Hydroelectric power plants have represented the main engine of the growth of renewables in the area. Between 2000 and 2016, according to the report, the region’s hydroelectric capacity grew from nearly 16 GW to 44 GW, with the coastal countries of the Mekong basin in the forefront: Cambodia, Laos, Myanmar and Vietnam. Vietnam, for example, has also made huge investments in the hydroelectric sectors of neighboring countries for export purposes. Overall, power generation in 2015 included natural gas (41 percent), coal (33 percent) and hydroelectricity (16 percent).

The increase in economic well-being in Southeast Asian countries represented the main growth factor for regional energy demand. According to IRENA, between 1995 and 2015, energy consumption grew at a rate of 3.4 percent per year, also driven by rising incomes. The report predicted that energy demand would grow on average by 4.7 percent per year by 2035. Furthermore, the theme of economic growth goes hand in hand with that of energy security: if, to support demand, a large part of emerging economies relies on the import of energy sources such as oil and gas, supply is an issue of strategic importance. Much of these resources arrive in Southeast Asia through the Strait of Hormuz and that of Malacca. In the case of oil, import dependency will exceed 80 percent in 2040, up from 65 percent in 2018, according to the IEA. For this reason, the countries of the area are called to cooperate to build energy security networks at the regional level, and in this regard the Association of Southeast Asian Nations (ASEAN) represents a hub of inestimable importance. In addition, in addition to not being an infinite source of energy, fossil fuels are also considered to be responsible for climate change and environmental deterioration. This opens the way to the theme of energy diversification, which is linked to the enhancement of renewable energy sources in the regional energy mix, in order to combine sustainable commitment and socio-economic advantages for indigenous populations.

The potential of hydropower in the region

In 2018, the International Energy Agency (IEA) reported that 18 percent of Southeast Asia’s energy comes from the hydroelectric sector, which has the advantage of being able to produce energy on a large scale as well as on a small scale. Small-scale projects – independent of the national electricity grid (off-grid) – can be implemented with lower start-up costs; this is why they are considered the optimal solution for rural areas, where electrification is still a challenge. In addition to being economically very expensive, significant technical and logistical resources are also required. According to the Alliance for Rural Electrification, the competitive advantage of hydroelectric power lies in the fact that, compared to fossil fuels, it has a carbon footprint close to zero. Combined with these rural electrification systems, this energy source could represent an optimal solution to meet the growing regional demand and at the same time favor the sharing of the benefits of economic growth also in the Asian countryside.

When it comes to hydroelectricity in Southeast Asia, the debate revolves around the strategic relevance of the Mekong, one of Asia’s largest rivers. Starting from the Tibetan plateau, the Mekong crosses southern China, Myanmar, Laos, Cambodia and Vietnam, and is an irreplaceable source of food, water, income and energy for local populations. The Mekong River Commission predicts that energy demand for the Lower Mekong River Basin (LMB) will grow by 6-7 percent annually, also thanks to increased investments in electrical infrastructure. In order to generate hydroelectric energy, the construction of dams is used, which have lower operating costs compared to the infrastructures used for the production of other types of energy. According to the Alliance for Rural Electrification, where the stream meets steeper points, even more energy is generated. That is why even countries like Laos have dozens of hydroelectric power plants, and can get to enjoy a total hydroelectric capacity of 7 GW. Dams aim to control water flow and store energy potential, and could make up for the regional energy shortage. In Southeast Asia, the Irrawaddy and Chao Phraya rivers also play a crucial role in water supply, although most of the ongoing projects have been slowed or suspended due to last year’s health crisis.

There are a number of social and environmental costs associated with building this infrastructure on river basins. Although they are designed to generate clean energy and start regional economies towards sustainable development, the dams built along the rivers can cause irreparable damage to the river itself and its fauna, and therefore to local communities that base their livelihoods on river resources. There is therefore a price to pay linked to the risks of interruption of water courses that stop the flow of nutrients for the well-being of ecosystems, as well as hindering the migration of fish. Indigenous communities also have to deal with the danger of flooding which can cause damage to local socio-economic systems. The hydroelectric sector can involve risks of deterioration of the same environment that renewables would like to protect.

Advantages and disadvantages of the sector

According to the Mekong River Commission, the hydroelectric sector in Southeast Asia therefore has advantages and disadvantages. While, the Commission estimates, it could record economic gains of over $ 160 billion by 2040, implying the development of other sectors, including agriculture – linked to food security and poverty reduction – there are a number of dire consequences related to its development. The Commission notes that the decline in fishing could cost nearly $ 23 billion by 2040. Furthermore, the loss of forests, wetlands and mangroves could cost as much as $ 145 billion. The growth of rice along the Mekong, a source of livelihood for indigenous communities, is also at the expense of this situation.

Some experts believe that the use of energy agreements could be a solution, as it would reduce the number of dams needed to meet regional demand. ASEAN plays a fundamental role in this sense: the ASEAN Power Grid is the infrastructure project designed to connect the economies of the area by creating an integrated electricity grid. The idea was first discussed in the 1990s and is still under development. The initiative aims to meet the growing demand for electricity and improve access to energy services in the region. To date, six bilateral interconnections have been made, linking Singapore and the Malay Peninsula, Thailand and Peninsular Malaysia, Thailand and Cambodia, and finally Laos and Vietnam. According to some observers, the main sources of energy demand (first of all, cities) will thus be connected to multiple production sites, and it is hoped that this will reduce the pressure on river basins and the associated risks. The regional cooperation promoted by ASEAN can therefore represent the solution to the eternal trade-off between economic growth and environmental protection, and mitigate the risks associated with the use of the hydroelectric sector, which also represents an invaluable resource given the peculiar geography of the region. .

* Valerio Bordonaro is director of the Rome office and advisor to the president of the Italy-ASEAN Association, an organization founded and chaired by Romano Prodi to promote exchanges and mutual knowledge between Italy and Southeast Asian countries. Article published in the July 2021 issue of We World Eenergy

“WE World Energy is the international magazine on the world of energy published by Eni – directed by Mario Sechi – which with its wealth of experience and science has earned a position of great importance in the international panorama of the sector media”.