Dortmund falls and the error of substitutions spoils the joy 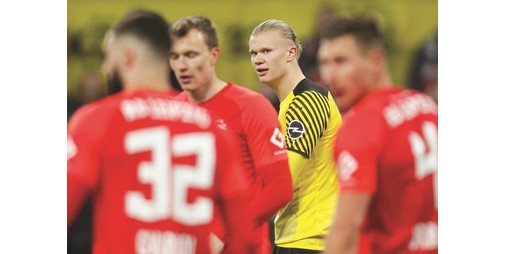 Leipzig rendered a great service to leaders Bayern Munich, who defeated Freiburg 4-1, by dropping their second host, Borussia Dortmund, 4-1, Saturday, in the twenty-eighth stage of the German Football League.

Bayern regained the nine-point difference from runner-up Dortmund after raising his score to 66 points, while the yellow team’s balance froze at 57 points, to take a step towards preserving its title and crowning the tenth time in a row, six stages before the end of the season.

Fourth Leipzig boosted its hopes of grabbing the last qualifier for the Champions League next season, after raising its score to 48 points, two points behind Bayer Leverkusen, the third, who won 2-1 at home, Hertha Berlin, and 3 points ahead of Freiburg.

For his part, Freiburg, fifth in the standings, suffered a first loss in seven matches, in a distinguished season in which it competes for a ticket to qualify for the European Champions League.

The match was stopped in its last minutes, after a controversy over the number of Bayern players after making one of the substitutions.

Although Freiburg needs to file an official complaint in order for there to be repercussions for the Bavarian club, referee Christian Dingert referred to the incident in his report and said: “Now the German Football Association must decide.”

Under the League Rules, such a violation of the Substitution Rule could result in the loss of a winner.

In addition, Bayer Leverkusen tightened its grip on third place by beating Hertha Berlin 2-1, Bochum managed to beat Hoffenheim 2-1, and Eintracht Frankfurt tied the ninth and its guest Greuther Fürth, bottom of the standings, without goals, and Armenia Bielefeld also tied its 14th guest, Stuttgart 1 -1.