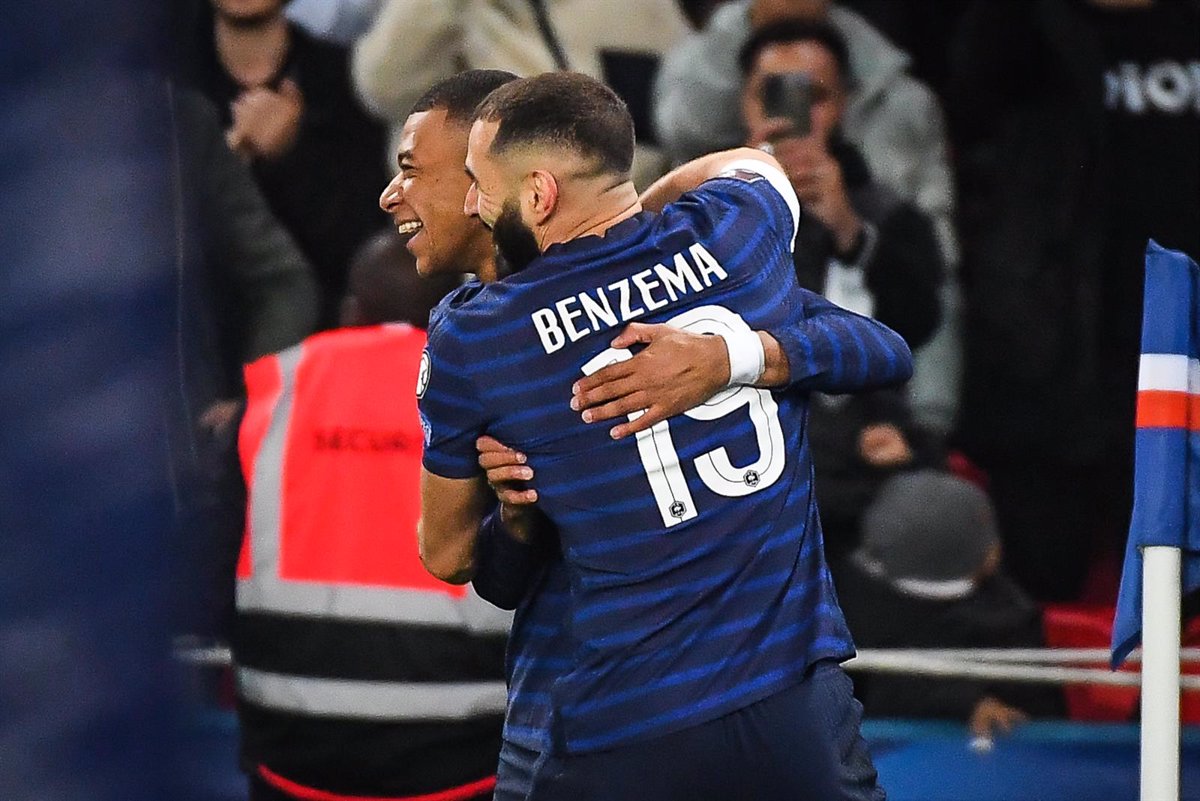 Karim Benzema, Real Madrid’s French striker, insisted once more that he enjoys playing with his compatriot Kylian Mbappé and that they would score “double or triple goals” with him in the Madrid team, while also emphasizing that he has not taught Vinicius Junior to “play football,” but rather to improve his decision-making.

“I enjoy playing alongside him for the national team, and I hope to do so at Real Madrid as well. We’d score twice as many goals, in my opinion. Maybe even three times!” In an interview with the publication ‘L’. Equipe’ published this Tuesday, Benzema said with a giggle.

The Lyon player, who has said “often” that his compatriot could be a strong addition to the Madrid attack that he and Vinicius Junior create, has highlighted that he understands “well” with the current Paris Saint-Germain player because they both know “what the other will do.”

“For example, we both want to move to the left, but we’ll never be there at the same time, so one will go in or look for it in depth,” added the international, who is open about how important it is for him to have excellent connection with his attacking partners. He considered, “I accurately evaluate each player’s game to predict where he will go in different situations.”

Other compatriots Benzema praises include FC Barcelona’s Ousmane Dembélé, whom he likes “a lot.” He described the winger as “unbalanced, knows how to play on touch, and puts fantastic crosses,” while Antoine Griezmann warned that he is “a world’top’ player” with “immense abilities.”

“Vinicius did not learn to play football from me. All I did with him was persuade him to change his mind because he had an idea to overwhelm him and then it was a case of “let’s see what I can accomplish.” He’s overwhelmed today, not sure if he’ll score, cross, or penetrate… Everyone is talking about Vinicius this year, yet he is the same player as last year. The only difference now is that he makes the correct choices. He thinks, and I taught him how to think “He said this about Real Madrid’s Brazilian winger.

On the ‘Ballon d’Or,’ the Lyon player is open about the fact that “it is a goal.” “Especially since I believe I was not far behind last year, but my club had yet to win a trophy. It’s a personal drive, but I also consider the squad, because if I can get them to win trophies, there will undoubtedly be individual benefits “, and be truthful

CITY, LIVERPOOL, AND BAYERN ARE NOT HIS FAVORITES.

In the Champions League, Benzema warns that “no favorite” exists in the match against Chelsea of England. “We were perhaps favorites in the first leg against PSG, but PSG had become ultra-favorites in the second leg, so that doesn’t mean anything. Chelsea is an excellent club, but we will travel to London with the hopes of getting a positive result “, he said, pointing.

He also disagrees that Manchester City, Liverpool, or Bayern Munich are the favorites. “That is not how I see it at all. I watch the games and City’s goal is to hold control of the ball and create a long possession in the opposing half, but they haven’t yet faced a side that attacks them well from behind. Liverpool is similar in that it is very good, particularly at home, while Bayern Munich is a side that scores goals but concedes a lot as well. PSG was the team that terrified me the most “, the ‘9’ stated.

Finally, the Frenchman wants to be “proud” of what he has accomplished towards the end of his career. “My main goal was to attempt to develop into a ‘perfect’ striker. Ronaldo Nazario was one of my heroes because he revolutionized the position when I was a kid, and no one can accomplish what he did now; it’s impossible. Nobody compares to him, and saying that this player recalls Ronaldo is a fabrication. My greatest achievement would be if I had reinvented the forward position in my own way “he stated