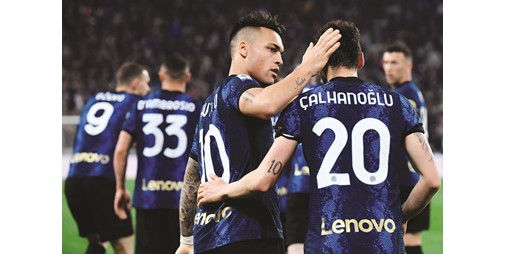 Inter inflicted its hosts Juventus on its first loss since late November by defeating it 1-0 in a summit match between them in the thirty-first stage of the Italian Football Championship, which saw Napoli continue to pressure Milan, the leaders, to return with the three points of the match from Atalanta by beating it 3-1 on Sunday.

Last season’s defending champion Inter raised his score to 63 points, 3 points behind Naples and Milan, knowing that the Nerazzurri have a game in hand, while Juventus remained fourth with 59 points.

Juventus entered the match unbeaten in the last 16 league matches (11 wins and 5 draws), and its last loss dates back to late November. And the victory is only the second for Inter over Juventus in the last 16 matches, and the first returns to the third of November 2012, while Juventus won during this series 10 times.

Napoli continued to put pressure on leaders Milan, with a valuable 3-1 victory over Atalanta. It is noteworthy that Napoli has not been crowned the Italian League champion since 1990, led by the late Argentine legend Diego Maradona when he scored his second Scudetto, knowing that the latter led him to his first title also in the local league in 1987.

On the other hand, Atalanta continued his bad performances at home this season, as he achieved only four victories in “Serie A”, and failed to enhance his chances of reaching the Champions League next season, as he has 51 points, eight points away from the fourth Juventus, who plays later with Inter guest.

Roma continued their positive performances and maintained their unbeaten record in the last 10 league games, by winning away to Sampdoria with a single goal.

Roma is fifth, 5 points behind Juventus.

Fiorentina remained in the fight for a ticket to participate in the European competitions, by defeating Empoli 1-0.