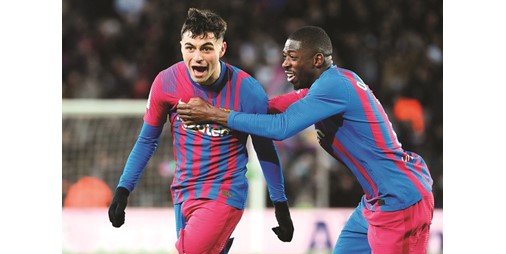 The promising youngster Pedri scored a wonderful goal to lead Barcelona to a 1-0 victory over its guest Sevilla and drop it from the second place in the Spanish Football League, in the 30th stage of competition on Sunday. Barcelona raised its tally to 57 points, ahead of both Atletico Madrid and Seville, who slipped to fourth place, knowing that the Catalan club has a postponed match. However, the “Blaugrana” is still 12 points behind its rivals, Real Madrid, the leader, and his hopes are not high in the possibility of achieving a surprise and crowning the title, except in the event of unexpected results.

And coach Xavi Hernandez’s team maintained his unbeaten record in the last 14 matches in the league, the longest streak currently in the five major leagues, and ended a series of 15 matches without losing a row to Seville. The Catalan club prepared in the best way for its match against its German host, Eintracht Frankfurt, on Thursday, in the first leg of the quarter-finals of the European League “European League” in its quest for a single possible title this season. For his part, Barcelona coach Xavi Hernandez expressed his happiness with the victory over Sevilla, and said: “I am very positive, and I believe in work, effort and sacrifice, so the results come. Seville is an excellent team, adding in the “La Liga” as long as the accounts do not say that we lost the title, we will continue to fight.

In addition, Real Betis boosted their chances of reaching the Champions League next season with a 4-1 victory at home to Osasuna, while Athletic Bilbao kept their hopes of seizing a continental position by beating 2-1 at home against Elche.

And Betis raised his score to 53 points in fifth place, a point away from Barcelona.

After a defeat and a draw in the last two stages, Athletic Bilbao returned to victories, boosting its hopes of securing a European seat by defeating Elche, raising its score to 44 points in eighth place.