Pioli after stumbling against Bologna, Milan’s problem in 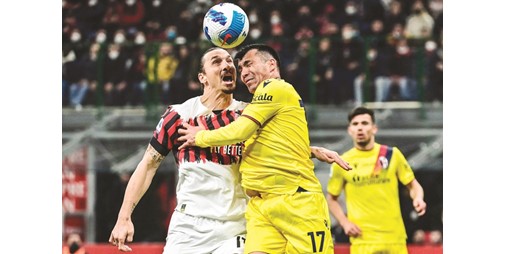 Milan coach Stefano Pioli expressed his frustration after the 0-0 draw against Bologna at the end of the 31st stage of the Italian Football League.

The Rossoneri occupies first place in the Serie A standings with 67 points, while Napoli is second with 66 points, and Inter Milan comes in third with 63, knowing that it has played one game less. “It is easy to analyze tonight’s match, we were unable to find the decisive moment, the last ball or the shot that changed the course of the match, and we did everything else,” Pioli said in comments reported by “Football Italia”.

“These are matches in which if you break the deadlock early, it becomes easy, and if that does not happen, it will be very difficult.” Pioli continued, explaining his idea by saying, “At the moment, we create a lot of chances, but we don’t finish them perfectly. This is a fact shown by the statistics. We play football our way, but we don’t take chances.”

Swedish striker Alexander Isak led his team, Real Sociedad, to a fatal victory in the “90 + 6” minute, through a penalty kick, against its guest Espanyol 1-0 at the end of the thirtieth stage of the Spanish League, which witnessed Alaves abandoning his coach after only 12 games under his supervision. Sociedad raised its score to 51 points in sixth place, while Espanyol’s balance froze at 36 in twelfth place.

In addition, Freiburg lodged a protest over its 4-1 loss to Bayern Munich on Saturday when the defending champions fielded 12 players for several seconds and the team said they felt uncomfortable with the decision.