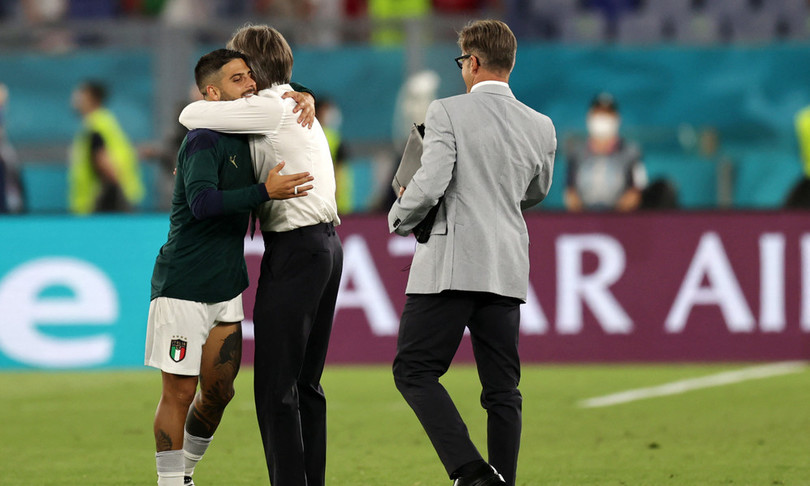 AGI – The Restart is staged at the Olimpico in Rome. It is not just a football match, in fact, the one played (and won 3-0) by Italy with Turkey, before the European football championship. It is also a symbolic event. As symbolic is the act of kicking the ball. In fact, in the blue ‘magic night’ at the Olimpico it was given a kick to the ball and another, symbolic, to the pandemic and the worst crisis that hit the world after the war.

From symbol to reality: the 60th time of the Italian national team at the Olimpico in Rome coincides with the first victory at Euro 2020. A clear and far from obvious victory. And, above all, not predictable (even if desirable for Italy) with these dimensions. IS a triumph of play and goals in a match dominated by the Azzurri and ended with a clear victory of our national team for 3-0 with goals from Demiral (own goal), Immobile and Insigne.

Mancini: satisfaction for us and the Italians

“We played a good game. In these games, everything is needed: there was help from the crowd and the team played really well“. To the microphones of Rai Sport Roberto Mancini at the end of the match, in the heat, contains his joy, but appears very satisfied with the game and the result of his national team.” Italy had a good match – he adds – it was important to start well in Rome: it is a satisfaction for us, for the public and for all Italians“. Mancini is happy but he knows he hasn’t won anything yet. To get to the finish line, he adds,” there are still six and here there are other strong national teams. ”

Then, in a press conference, he adds: “We are a team that plays well and that has improved a lot over the years. Games are not won by chance, we are a young team that still needs to improve a lot. I had the evening I wanted ”, said the coach again Roberto Mancini, during the press conference at the end of the match.

“The guys have great merit and we have found teams that they give little space as Turkey did but we had patience. The first half was not easy. The defense was also very good, ”he added.

Domination, fun, passion. Three words that best summarize the debut evening of Euro 2020, the evening of Italy and the Italians. The public is seen in the stands again at the Olimpico in Rome and there could not be a better show to embrace it with the blue and the tricolor sewn on. Calhanoglu and Yilmaz’s Turkey tamed 3-0 with a disarming personality match, stronger than the initial emotion and tension that could play tricks. Demiral’s own goal, Immobile’s paw and Insigne’s usual right-footed shot decide, giving Roberto Mancini the first very important victory of the tournament, launching an important signal also in terms of character and on the level of the game. An evening of great celebration, but from tomorrow we will already have to think about the next one: on Wednesday there will be Switzerland.

With Verratti still in the pits due to injury and Castrovilli just arrived in blue after Pellegrini’s forfeit, Mancini chooses Locatelli to join Barella and Jorginho in the median in the 4-3-3. The biggest surprise, if you like, is the starting shirt for Berardi who wins the ballot with Chiesa in the attacking trident, completed by Immobile and Insigne. In the back section, however, everything confirmed with Donnarumma between the posts and a four-way line with Florenzi, Bonucci, Chiellini and Spinazzola.

The first offensive sortie is from Italy after a couple of minutes from the starting whistle: Berardi puts in the center saving a goal kick, Immobile tries to turn right but his conclusion is too strangled and imprecise. The blues play the game even if starting contracts and with a pinch of tension, but as the minutes pass, Mancini’s selection comes out of the shell in a big way with personality. At 18 ‘Insigne fails a goal ball from’ his’ tile, widening his right hand too much after an excellent exchange with Berardi. A little later, however, on a corner beaten by Insigne himself, Chiellini hits the head in the heart of the penalty area calling Cakir to a super save. Turkey remains more on the defensive, more worried about limiting the Italian attack actions rather than trying to look out from the parts of Donnarumma, if not trying to set up some counterattack that is never really poisonous.

After half an hour of play, Italy still shows itself ahead: Immobile fails to frame the mirror with a header from Berardi’s cross, a few actions later Insigne tries again from the edge by finding a deviation that accommodates the ball between Cakir’s gloves. The last blast before the break, preceding a possible penalty not whistled by the Azzurri (Celik’s wide arm on a Spinazzola cross), is still with the Immobile logo, which fails to impart strength and precision to its conclusion from an inviting position.

Upon returning from the interval, a change on each side immediately: Mancini leverages Florenzi by inserting Di Lorenzo on the right wing, while Gunes opts for the former Roma Cengiz Under in place of Yazici. Slightly more lively the Turks with the entry of the offensive winger, but the script of the match remains almost the same as in the first 45 minutes, with Italy in total control of operations. At 53 ‘comes the blaze that unlocks the game in favor of the Azzurri: Berardi runs away on the right and from the back he puts in the center finding the awkward deviation of Demiral who throws it into his own door, giving Italy the 1-0. Driven by 20,000 Olimpico fans and a Spinazzola in a state of grace, Mancini’s team became dangerous in at least three other occasions in a few minutes. The Roma full-back kicks by finding Cakir’s response, also good at Locatelli later on.

At 59 ‘, however, the great opportunity for the doubling happens on the feet of Berardi, who becomes enticed in the open area by kicking very badly rather than serving Insigne or Barella freer in front of the goal. A well-deserved doubling that is not long in coming, given that in the 66th minute Immobile will think about placing the paw of 2-0, easily reiterating on the net yet another rejected by Cakir on the right of a super Spinazzola. Gunes’s team tries to hint at a timid reaction, although never creating dangers for Donnarumma, but from a mistake in Cakir’s raise in the 79th minute the action that leads to the blue trio is born.

Immobile this time gives the assist to Insigne, who takes aim and with his favorite shot directs to the farthest corner by scrolling the credits on the match. In the final, Turkey’s only chance with Yilmaz is canceled by a providential slip by Chiellini. Italy wins, has fun and entertains: a group like this hasn’t been seen for a long time, the conditions for doing well are all there. You have to keep working hard while keeping your feet firmly on the ground.