The 8 Italian stages of the Navy Nastro Rosa Tour 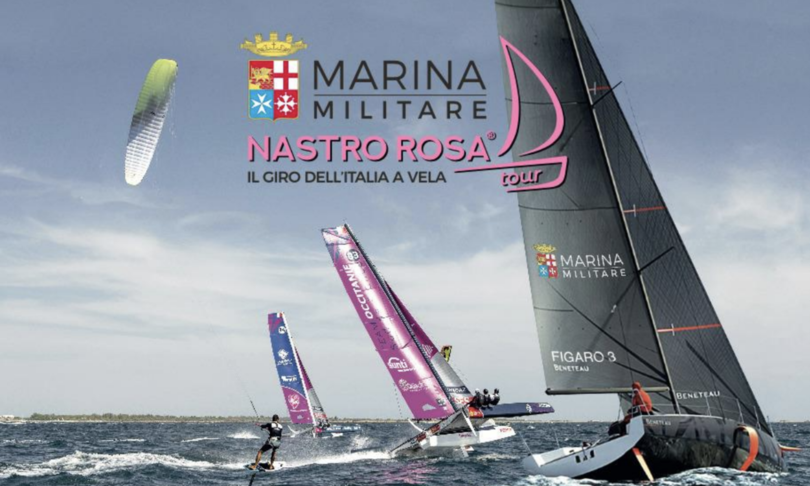 ` – A sailing tour of Italy which, with the patronage of Coni and with the support of the Italian Sailing Federation and the Gazzetta dello Sport, will cover eight stages along the Italian coasts, to promote the values ​​of the Navy, enhancing its brand, and to celebrate the beauty of our seas. We are talking about the “Navy Ribbon Rosa Tour” with the color recalls the sports newspaper and symbolically joins all the seas of Italy: it will take place in two blocks (the Tyrrhenian and the Adriatic), officially moving from Genoa on August 27th. .

Participants will be engaged until 5 September, when the fleet will reach Naples after touching Civitavecchia (31 August) and Gaeta (3 September). A second set of regattas is scheduled between 16 and 26 September and will be used to lead the boats from Brindisi (16 September) to Venice (24 September), with intermediate stops in Bari (19 September) and Marina di Ravenna (23 September). .

Each stage will see national and international teams race in the three sailing disciplines, offshore, inshore, boards, with a traveling village open to the public where you can discover all the details of the competition, starting with its protagonists. To devise this sporting initiative, of international importance, in compliance with all anti-Covid measures, is Difesa Servizi (the joint-stock company with sole shareholder the Ministry of Defense), with the commitment of SSI Events and some important partners, starting with Fincantieri.

An initiative that is part of the Valore Paese Italia project developed by the MiC, together with the ENIT – National Tourism Agency – and the Agenzia del Demanio, and which also aims at the enhancement of lighthouses and coastal buildings, in collaboration (as well as with the same Coni), with the Italian Sailing Federation, the Institute for Sports Credit, WWF Italy, Touring Club Italia, Cittadinanzattiva and together with the DIMORE partners, such as AICA, ANCE and ANCE youth.

The Navy, in fact, has been responsible since 1911, through the Lighthouses and Maritime Signaling Service, for the correct functioning of navigation aids. The “Marina Militare Nastro Rosa Tour” is in fact an innovative regatta in stages along the coasts of Italy, with the specialists of boards kite foil, the new Olympic class scheduled for 2024, the crews of the very fast Diam 24 catamarans, chosen for stadium racing, and the mixed man / woman pairs aboard the very famous Figaro Beneteau 3, chosen for the long offshore tests.

All classes will involve internationally renowned athletes, including Olympic medalists and specialty champions. The sailing crews of the Sports Groups of the Armed Forces and of the State Corps are also invited to participate in the competition. In this context, the collaboration and support of the Maritime Departments and the Port Authorities are fundamental for the perfect success of the event. For sailing practice, the Navy has 13 Sailing Sections located throughout the territory, within which training activities are carried out for participation in competitions.

218 sailboats made available: 32 offshore boats, 41 coastal boats and 145 dinghies. And it should not be forgotten that the Marina is also the largest owner of vintage boats with 12 boats.

“The event will animate the stage venues bringing the action a few meters from the docks thanks to the regattas with the stadium race formula and with a race village that will allow enthusiasts and professionals to discover the dynamic world of the” Navy Nastro Rosa Tour 2021 “.

In 2020 the Tour showcase started in the ancient port of Genoa from 31 August to 6 September, continued in the Military Arsenal of Venice from 2 to 4 October, to end in Trieste, from 7 to 10 October, with the participation of the tour boats to the classic Barcolana. The new edition – with a much broader program – starts again from Genoa (26-28 August) which will anticipate, with dedicated events during the event, the Ocean Race, the final stage of the next edition of The Ocean Race in 2023, a historic appointment as it will be the first time that the crewed round-the-world sailing tour will stop in Italy.

On the occasion of the Civitavecchia leg, scheduled from 31 August to 2 September, the training ship Amerigo Vespucci will be moored in the port, a sailing ship carrying positive messages that will give visibility to the event.

For this reason, the organization intends to establish the “Amerigo Vespucci trophy”, to be assigned to the best crew classified among those belonging to the Military Sports Groups and the Armed Corps of the State, with a view to healthy competition typical of sailing.

The presence of the Vespucci ship is particularly symbolic, because the sailing ship represents the perfect synthesis of the union between sailing and the training of young sailors. As mentioned, the 2021 Tour will develop in compliance with current Covid legislation. In this sense, the sail and the Pink Ribbon in particular, offer the best guarantees: the adoption of a specific safety protocol, the health support provided by the General Inspectorate of Military Health and by the National Inspectorate of the Voluntary Military Corps of the Italian Red Cross, the presence of GATEAKT sanitation gates and the carrying out of serological and antigenic tests with the AFS-1000 diagnostic system made available respectively by TEKNE srl and CIMAF srl (myTest diagnostics), as partners of the event. Everything will take place outdoors with crews of up to three people. No teams, sports halls, but a scenario that offers the maximum guarantee of controllable and possible performance, as demonstrated by the 2020 prologue.