City and Atleti are a difficult match in the Champions League 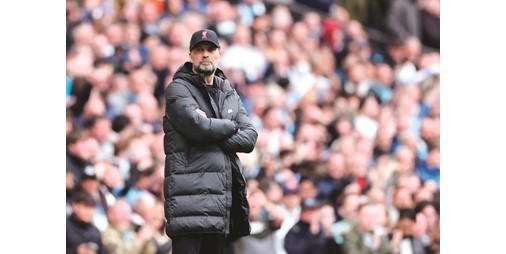 4 days after their 2-2 draw in the local league, and 4 days before the rematch between them in the cup semi-finals, Man City and Liverpool, the two Englishmen, enter into a continental “truce”, when the first meets with its Spanish host, Atlético Madrid, and hosts the second, Benfica, today, Wednesday, in the second leg. Quarter-finals of the Champions League.

Until the date between “City” and “Reds” is renewed on Saturday at Wembley Stadium in the semi-finals of the local cup competition, Man City and Liverpool will focus on booking their tickets to the Champions League semi-finals, where the Reds will have a much easier task than Guardiola’s men after winning the first leg away from Benfica 3-1, while the Premier League champion was satisfied with a 1-0 victory over “Atlé” at the “Ittihad Stadium”.

Guardiola will return to his country in search of a ticket to qualify for the round of four for the second season in a row, knowing that the task will be difficult in front of the Argentine coach Diego Simeone’s battalion.

In today’s meeting at the “Wanda Metropolitano” stadium, the defense will not be enough for Atletico, but rather it needs to score to compensate for the loss in the first leg, which will give Man City the opportunity to exploit the spaces and free up its attacking machine, provided that it does not allow its host to score the goal of progress because this will complicate the task and push Simeone’s men to close The ports are as usual, and therefore it will be difficult for the “Citizens” to reach the net of the Slovenian goalkeeper Jan Oblak.

In contrast to Man City, who played a great match against Liverpool and advanced over the latter on two occasions, Atletico Madrid enters today’s meeting with shaky spirits after losing Saturday in the league against Real Mallorca 0-1, which made Simeone’s team, which occupies the last fourth qualifier for the Champions League next season, under Real Betis’ threat, which is only a point away from him.

At Anfield, Liverpool will certainly have an easier task than Man City, after the impressive result they achieved in the first leg at Benfica, thanks to the goals of Frenchman Ibrahima Konate, Senegalese Sadio Mane and Colombian Louis Dias.

Benfica will have to win by three goals in order to continue their adventure in the continental competition, which makes the task very difficult for coach Nelson Verissimo’s team, although it reached the quarter-finals after its victory over Ajax Amsterdam 1-0 back at the latter’s stadium after a 2-2 draw in the first leg.

It is very unlikely that Benfica, who dreamed of restoring the glories of the sixties when he won the title twice in succession in 1961 and 1962, will repeat the scenario of his last visit to “Anfield” in the Champions League when he won 2-0 in the second leg of the 2005/2006 season final price after winning the first leg as well. -0, because the current Liverpool is completely different with the presence of the distinguished German coach Jurgen Klopp and players such as the Egyptian Mohamed Salah, the Senegalese Sadio Mane, the Portuguese Diogo Jota, and the Dutch defender Virgil van Dijk.

What makes Benfica’s task so difficult is that Liverpool, crowned in the European competition six times, the last of which is in 2019, is going through a wonderful period, after compensating for its delay in January by 14 points from City, reaching only one point after a series of 10 consecutive victories that ended Saturday with a draw at the Etihad Stadium. ».

Klopp’s team also won the first seven matches in the Champions League this season before losing once at home to Inter Milan 0-1, but that did not prevent it from qualifying for the quarter-finals by winning the first leg away from home 2-0.