“The mystique of the Bernabéu helps the players a lot to never give up,” Carlo Ancelotti says 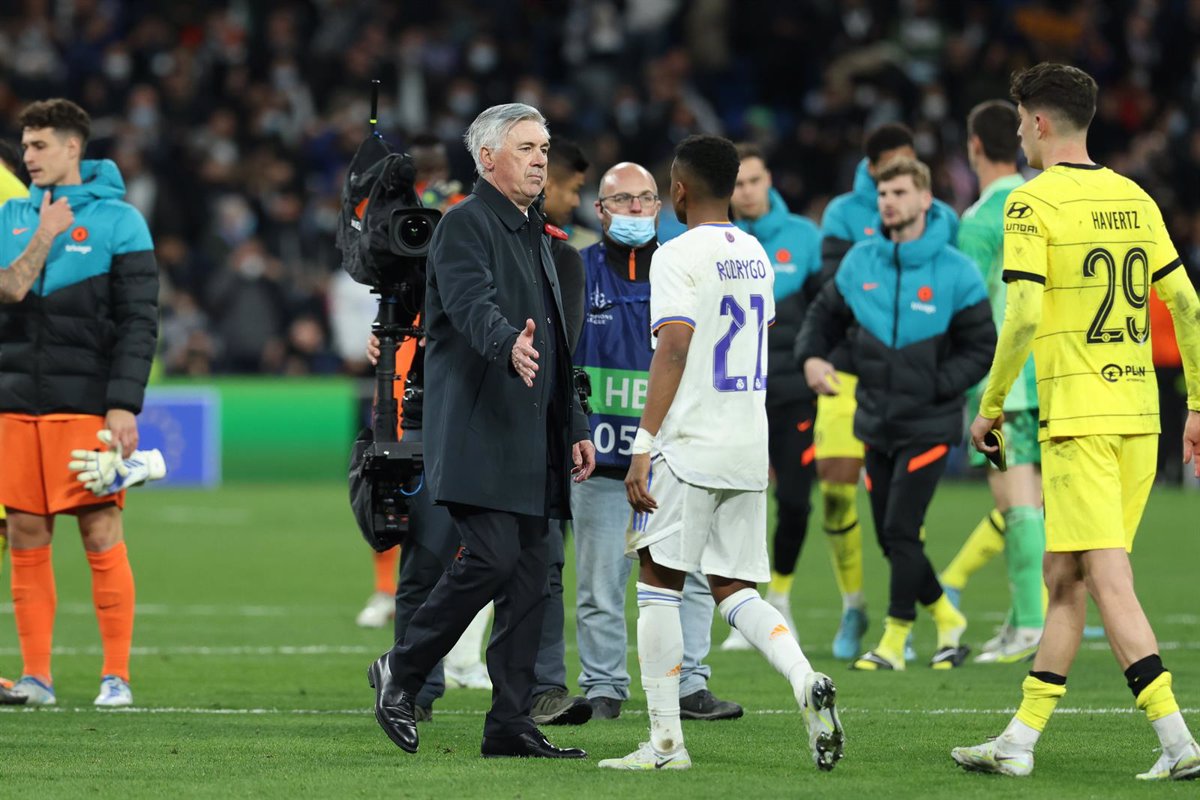 Carlo Ancelotti, Real Madrid’s coach, admitted that he “never” feared losing to Chelsea and that “difficulties” arose after the 0-2, but that “the magic” of the Santiago Bernabéu appeared to “help a lot to the players to never give up” and save the ticket to the semifinals in extra time, where “the energy” of Rodrygo and Camavinga was crucial.

“We had a psychological drop after going down 0-2, but the aura of this stadium encourages the players a great deal to never give up, and we never give up. I’m overjoyed to have made it to the semi-finals with this club after much pain, but the more I struggle, the happier I am “At a press conference, Ancelotti stated.

The Italian insisted on the tensions that the Madrid rivalry generates in a match that he “never” believes will be lost. “I thought it was tough, but I can’t imagine everything being lost in the Bernabéu; it’s impossible to explain, but the magic helps. It has aided Carvajal’s excellent play as a central defender, as well as the team’s extra energy, in reaching the semifinals “, he emphasized.

“We were able to win because we were able to maintain our enthusiasm throughout the game, especially in the latter stages of the game. The only alterations were to increase the amount of energy put into it. I believe the team has been through a lot and that everyone has showed their emotions, but we did not deserve to be down 2-0. Because we were missing our greatest player (Militao), we struggled at set pieces, and the 0-1 came from a rebound, but we weren’t desperate to score goals in the first half either “, indicated the Reggiolo player.

At 0-3, Ancelotti remained calm because “you have to be calm to fully analyse” his judgments. “I brought on Rodrygo and Camavinga to boost energy since Chelsea’s pressure has taken a toll on their bodies, and this has given us an edge in extra time because we were fresher than them,” he explained.

“Rodrygo has made the difference on numerous occasions, including against PSG and today. He’s young and important, and he’ll need some time to settle in. It can change if the game is low-intensity and you have Valverde, Rodrygo, and him fresh “He went into great depth about the impact of the Brazilian and French.

Finally, the Madrid coach stated emphatically that “no one” can or will declare that they cannot or will not “win” the Champions League. “Today, I believe we shown that we can compete until the very last game. I also want to congratulate Villarreal on their strong showing, as well as Unai Emery, because nobody expected two Spanish teams to reach the semifinals. Two have already arrived, and the third may arrive tomorrow; no one knows “, he declared.