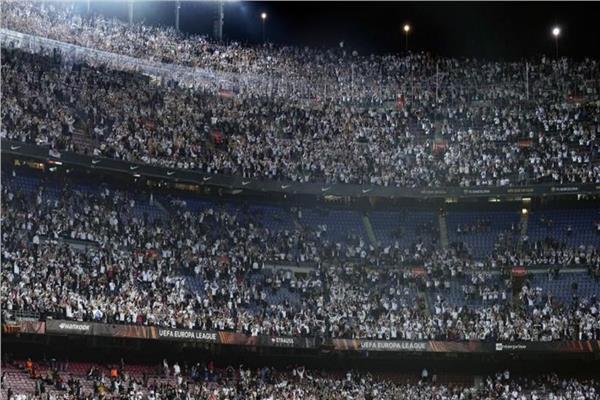 Eintracht Frankfurt qualified for the semi-finals of the European League after defeating Barcelona in a resounding surprise at the Camp Nou.

Yesterday, Barcelona was defeated 3-2 in its stadium, which was covered in white by the color of Frankfurt fans, who dominated the European League quarter-final second leg match inside the stadium and in the Catalan stands.

The meeting was attended by more than 30 thousand fans from Eintracht Frankfurt, and celebrated the victory of its team at the Camp Nou, and its qualification to the semi-finals of the European League.

Barcelona’s corporate vice president, Maria Elena Forte, confirmed that the club “did not directly sell” tickets to more than 25,000 fans from Eintracht Frankfurt.

And in the face of the German fans gathering in Barcelona, ​​​​the club stopped selling tickets in the Camp Nou outlets last Wednesday, to avoid buying the opponent’s fans.

In statements on EACI radio, the Barca manager apologized to the partners who attended the match, stressing that the club is looking into “the reasons for the failure” not to repeat what happened against the German team in the future.

Following the regulations of the European Football Association (UEFA), Barcelona sent the German club 5,000 entry tickets for 5% of the capacity of the Camp Nou stadium.

But the Barca stadium was eventually filled with Eintracht fans, with an estimated 25,000 to 27,000 of the 79,468 fans attending the match, according to Barcelona estimates.

Forte revealed that the tickets available were sold remotely and “the first minute” Internet protocol (IP) addresses as well as German credit cards were banned, which is usual in European matches to avoid what happened against Eintracht Frankfurt.

Barcelona is investigating the reasons for the end of these tickets in the hands of Eintracht fans, who celebrated their team’s qualification to the European League semi-finals.

One of the assumptions, Fort revealed, was that ticket resale companies bought tickets with Spanish credit cards and sold them to German fans.

The club rules out that the loophole occurred as a result of companies that usually sell entry tickets to tourists.

To avoid the possibility of a repeat of this situation in the future, Fort did not rule out forcing the club to print people’s names on tickets, but made it clear that all options that she warned might be “strict” would be considered.

Eintracht Frankfurt will strike a strong date with West Ham in the semi-finals, and the first leg will be held at the London Olympic Stadium on April 28, with the return match taking place at Deutsche Bank Park on May 5.

The German team Leipzig will meet Glasgow Rangers in the semi-finals, and the first leg will be held at the Red Bull Arena on April 28, while the return match will be held at Ibrox Stadium on May 5.

The 2022 European League final is scheduled to be held at the Ramon Sanchez Pizjuan Sevilla Stadium in Spain on May 18.