Royal to pounce on Seville and get close to 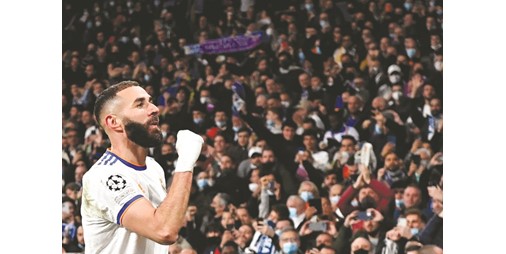 The expected confrontation between the third Seville and the leaders Real Madrid will be a gateway for the latter towards the Spanish Football League title, when the Madrid club is a guest in Andalusia at the top of the matches of the thirty-second stage.

Real’s victory at the “Ramon Sanchez Petjuan” stadium will leave it 15 points behind Sevilla, who were only 5 points behind the leaders at the end of January, and with a game less than they had at the time. However, the poor results of coach Julen Lopetegui’s men, with only 3 victories in 11 matches in “La Liga”, led to them falling behind in the title race and dropping to third place with the same number of points with Barcelona (60 each), which has a game in hand against Rayo Vallecano.

For his part, Atletico Madrid, which hosts Espanyol, hopes to return to the winning streak after losing to Real Mallorca 0-1 in the last stage. Athletic Bilbao meets Celta Vigo, and Granada meets Levante.

Pedri will miss the end of the season

Barcelona announced that its young international midfielder Pedri will miss the rest of the season, a day after he suffered a muscle injury in his left thigh during the second leg of the European League “European League” quarter-final against Eintracht Frankfurt.

It does not seem that anything, or even winning the tenth title in a row in the German Football League, can soothe the wounds of leaders Bayern Munich after his harsh exit against Villarreal in the quarter-finals of the Champions League. The problem for the Bavaria giants, who are visiting Armenia Bielefeld, who is threatened with relegation in the 30th stage of the competition, is that their dominance in the “Bundesliga” is no longer important to their fans and management.

Bayern is heading this season to win its tenth title in a row without suffering much, as it leads with 69 points and is 9 points away from its direct chaser, Borussia Dortmund, five stages before the end, which means that in the event of its coronation, it will win its 31st title.

Bayer Leverkusen meets its direct competitor for third place, Leipzig, with a point difference between them.

Marseille is playing the top of the French Football League with its host, Paris Saint-Germain, in the hope of reducing a vast difference between them, and its eye on the continental Conference Ligue match, where it reached the semi-finals.

Qatar-owned Paris Saint-Germain largely dominates “Ligue 1” this season, as it leads by 12 points from its southern rival, seven stages before the end of the season. In the most prominent matches of the day, Strasbourg IV will defeat Troyes fifteen, and Nice will host the fifth Lorient XVI.