Dortmund crush Wolfsburg for six in the German League 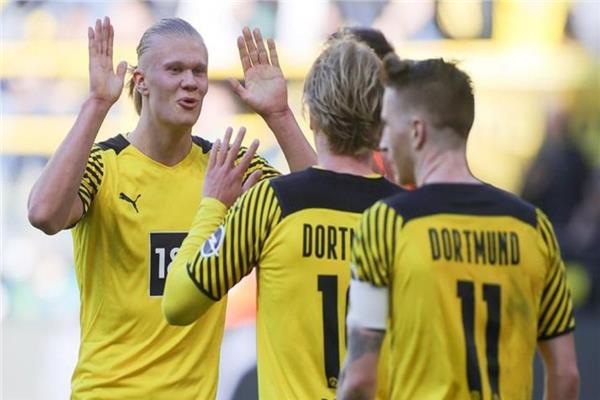 Borussia Dortmund won a landslide victory over its guest Wolfsburg, 6-1, in the meeting, which is being held at the Signal Iduna Park, as part of the 30 matches of the German League.

Dortmund scored 3 goals in four minutes after Tom Rothe opened the scoring in the 24th minute during his first participation with the first team.

Axel Witsel and Manuel Akanji added the second and third goals for Dortmund in the 26th and 28th minutes.

Emre Can scored the fourth goal for Dortmund in the 35th minute with a powerful shot from outside the penalty area.

In the second half, Norwegian striker Erling Halland played the championship role and scored the fifth and sixth goals for Dortmund in the 38th and 54th minutes.

Riddell Baku scored the only goal for Wolfsburg nine minutes before the end of the match.

Dortmund raised its score to 63 points in second place to temporarily reduce the difference to six points with leaders Bayern Munich, which meets on Sunday with its host Armenia Bielefeld, while Wolfsburg’s balance stopped at 34 points in thirteenth place.