Milan wakes up and Inter continues the pressure 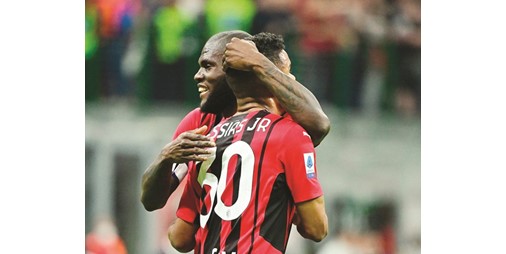 Milan woke up in time by defeating its guest Genoa 2-0, to remain in the lead in front of its arch-rival Inter, the defending champion, who in turn returned from Spezia Stadium with its third victory in a row, 3-1 in the thirty-third stage of the Italian League. With the season entering its final meters, Milan’s victory was very important in its quest to win the league title for the first time since 2011, especially after wasting it.

4 points in the past two stages, while his neighbor Inter won during them, which put him firmly in the heart of the title struggle.

At the “San Siro” stadium, Milan struck early by opening the scoring since the 11th minute with a goal by Portuguese Rafael Leao, and the Brazilian substitute Junior Messias rested the nerves of the “San Siro” fans by guaranteeing the three points with a goal in the 87th minute. Milan remained at the top by two points ahead of Inter, who achieved at the expense of Spezia won his twentieth victory this season, before the expected confrontation between coach Simone Inzaghi’s team and his arch-neighbour, in the second leg of the semi-finals of the Cup competition, after they tied the first leg 0-0 in a match calculated on the grounds of the “Rossoneri”, which shares the same stadium with its arch-neighbour.