Bülter and Terodde at Schalke 04: where the wild things storm 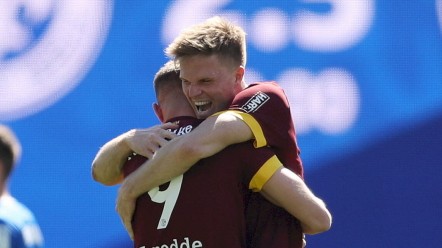 Schalke’s Simon Terodde clenched his fists and cried out his joy as if unleashed. His team was only awarded a corner kick shortly before the end of the top game in Darmstadt and was clearly leading 5:2 at that point. After the final whistle, Terodde then performed the famous “Kuntz saw”, jumped into his strike partner’s arms and ran wildly towards the other colleagues. The 34-year-old would probably have followed up with a flick flack, the Roger Milla dance or the cheering caterpillar, but urgently had to lead his teammates out of a scuffle with the opponent in a full sprint to the guest block. Terodde scored two header goals in Darmstadt, his number 23 and 24 goals of the season. “The second header goal in particular is almost exclusively scored by Simon, because from his position it was actually difficult to get the ball without a foul. That was excellent,” said Schalke’s sporting director later Rouven Schroeder.

Terodde has earned a reputation as a goalscorer-ADAC that frees traditional clubs from the morass. In Darmstadt, his colleague Marius Bülter, who studied mechanical engineering, also shone with three goals. “We wanted to win this game for Danny Latza,” Bülter said afterwards about the captain, who was replaced with an ankle injury, and described Schalke’s newly developed team spirit. Bülter himself had been pushed onto the bench or the right-back position by ex-coach Dimitrios Grammozis, on Easter Sunday he proved his technical skills, which are outstanding for this league, and his callousness. “Schalke were mercilessly efficient,” said Darmstadt coach Torsten Lieberknecht appreciatively.

His “lilies” had braced themselves against the defeat with all available means and center forwards. The club had made a motivational video entitled “Every voice counts”, the fan scene switched their lead singer to the adjoining stand via microphone and attacker Phillip Tietz overcame his slump in form with a brace. Schalke wobbled in the early stages because of the pressure from the ranks and Darmstadt’s wingers. They turned the youngsters of the Royal Blues Henning Matriciani and Kerim Calhanoglu over and over again. And yet Schalke exuded the steadfastness of a top team that, with the help of their strike duo or the famous Rodrigo Zalazar in midfield, can easily return any attack.

“We needed just such an effective performance to survive here,” summarized sporting director Schröder. After five wins in the last five games, Schalke now has a five-point cushion in fourth place. Next Saturday we face Werder Bremen, whose storm duo of Marvin Duksch and Niclas Füllkrug has a total of 47 points. Schalke strikers Terodde and Bülter managed an astonishing 52 in this discipline. Schalke could get wild again, but in a positive way this season.