Bayern is the master of Germany for the 32nd time 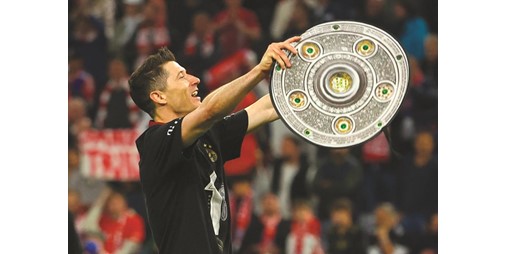 Bayern Munich consolidated its control of the “Classic” against its rivals, Borussia Dortmund, when it won it 3-1 in its favour, Saturday, in the thirty-first stage of the German Football League, and crowned the tenth title in a row and the 32nd in its history.

It is the 52nd “Classic” that the Bavarian giant wins out of 107 between the two teams in the “Bundesliga,” compared to 25 for Dortmund, who lost the seventh “Classic” in a row in the league. Bayern strengthened its position in the lead with 75 points, 12 points ahead of its traditional rivals, three stages before the end of the season. This is the first time that a team has won the league title for the tenth time in a row in the five major tournaments.

And if Bayern devoted its power to the “Bundesliga”, its Polish star Robert Lewandowski continued his scoring hobby in the “Classic” matches, as he netted his former team for the 27th time in 26 matches since his move to Bayern from Dortmund in 2014. To that, he won Union Berlin beat Leipzig 2-1.