Betis is the cup champion and Pellegrini deservedly crowned 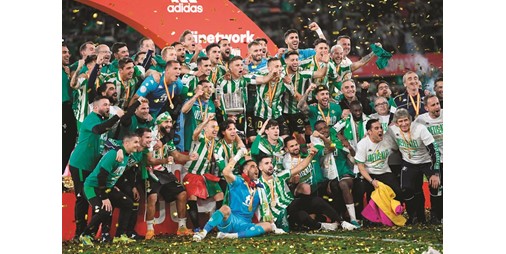 Real Betis won their first Spanish Cup title since 2005, and the third in its history, by defeating Valencia 5-4 on penalties after they tied 1-1 in the regular and extra time on Saturday at the “La Cartuja” stadium in Seville.

The two goals were scored in the first half of the match, as Betis advanced through Borja Iglesias (11), before Valencia responded through Hugo Duro (30).

Betis had previously won the title in 1977 against Athletic Bilbao, also on penalties (2-2 in regular and extra time), and in 2005 over Osasuna 2-1 after extra time.

This is the first time that the title has been decided by penalty kicks since 1998, when Barcelona was crowned at the expense of Real Mallorca, and it is only the second time in the last 12 final matches in which neither Real Madrid nor Barcelona are a party, while the first was the 2020 final postponed to the following year. Due to the repercussions of the Corona virus, it ended with Real Sociedad’s victory over Athletic Bilbao 1-0 in the Basque derby. Betis reached the final for the fifth time in its history by defeating Rayo Vallecano 3-2 on aggregate in the semi-finals, while Valencia defeated Athletic Bilbao with a total of 2-1 and reached the eighteenth final in its history, but was unable to lift the cup for the ninth time.

Thus, Valencia will come out of the season empty-handed as it occupies the tenth place in the local league, while Betis confirmed his distinguished season under the leadership of Chilean coach Manuel Pellegrini, who led him so far to occupy the fifth place in the league with 57 points, 4 points behind Atletico Madrid, the defending champion. The fourth-place finisher qualifies for the Champions League next season.

For his part, Real Betis coach, Manuel Pellegrini, said that his team deserved to win the King’s Cup before reaching the penalty shootout, because he hit the post twice during the match in which they overcame Valencia, in addition to the many opportunities that Betis had.