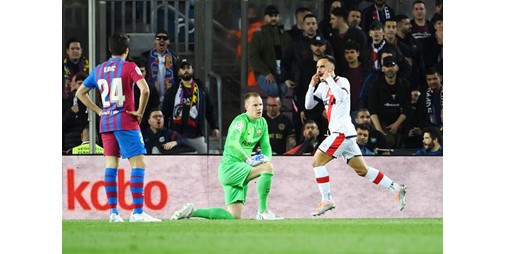 Barcelona fell for the second time against Rayo Vallecano this season, losing 1-0 at its “Camp Nou” stadium in a match postponed from the 21st stage, making its rivals Real Madrid a point away from crowning the Spanish Football League title. The balance of the Catalan club, which suffered the third defeat in a row at home in all competitions, is at 63 points in second place, like Seville in the third, 15 points from the leaders Real Madrid, five stages before the end of the season, so one point will be enough for the royal club in its match next Saturday against its guest Espanyol to crown its thirty-fifth title in its history.

And after he beat him in late October, Raico Vallecano renewed his victory over Barcelona with the same result, with Alvaro Garcia’s goal in the seventh minute.

After a series of impressive results this year and the team’s progress remarkably with coach Xavi Hernandez, Barcelona suffered in recent weeks after its sudden exit from the quarter-finals of the European League “European League” against Eintracht Frankfurt after losing 3-2 at home in a match that witnessed the presence of Nearly 30,000 fans of the German team at Camp Nou, after reports indicated that some of the team’s fans sold their cards.

Vaikano opened the scoring after Issey Palasson raised a wonderful long-range ball behind the defenders in the depth, breaking the midfield and defense to Garcia on the outskirts of the area.