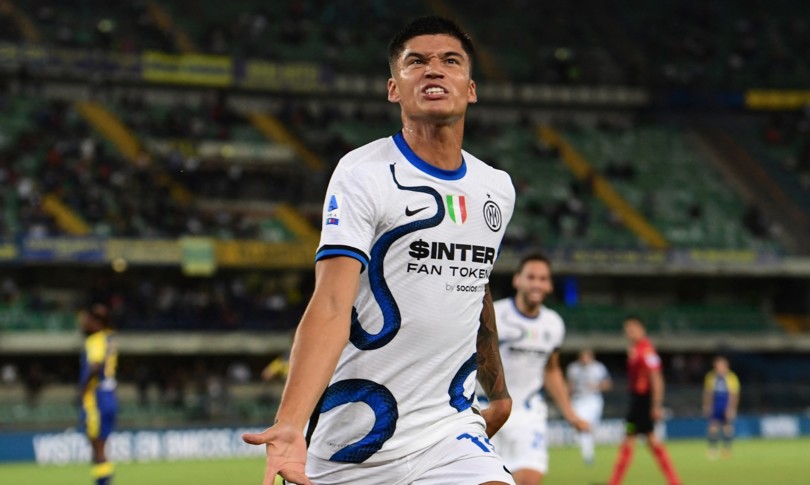 – – Inter are two out of two in this start to the championship and, albeit with some more effort than the debut, they snatch three heavy points from Bentegodi. Beat Verona in a comeback 1.3, designed by the Argentines Correa and Lautaro, who overturn Ilic’s initial advantage– A terrifying debut for the ‘Tucu’ who, taking over from the bench in the 74th minute, immediately signed his first double in the Nerazzurri shirt, sending his team to heaven. First appearance and first goal also for the ‘bull’ Martinez: all in the Inter attack in these first two games. The Nerazzurri try to play the game right from the start and at 12 ‘they build the first goal ball with Lautaro Martinez, who collects the ball in the heart of the area and kicks, finding Montipo’s good rebound.‘ But a few moments pass and on the other side it is the Venetians who suddenly unblock it: Handanovic misses the pass for Brozovic, Ilic regains the ball and with a soft touch underneath he beats the visiting goalkeeper for 1.0. The plans of Inzaghi’s team get complicated he seems to get nervous and lose some compass of the race, sinning with clarity and great game ideas. Much of the credit goes to Di Francesco’s men, who are always good at keeping the pressure high without leaving the opponents free to maneuver. In the final of the first half the yellow and blue have an excellent chance for a possible doubling, but Cancellieri kicks to the stars after a bank from Barak.

The turning point at the beginning of the recovery

At the dawn of recovery Inter immediately changes gear and finds an immediate draw signed by Lautaro, who all alone in the small area heads the 1.1 on Perisic’s lineout, extended by Hongla. At 55 ‘the situation repeats itself and almost the’ bull ‘does not find the personal brace, this time kicking to the left.handed side after Dzeko’s side, always resulting from a long throw from Perisic. Another handful of minutes pass and the Inter striker is still the protagonist in the Verona area: Hongla seems to intervene foully on Lautaro’s right foot, but the referee and Var do not consider it a penalty foul. Verona can’t shake, Inzaghi’s team, on the other hand, continues to produce a lot and at 83 ‘turns everything around– The signing of the 1.2 is that of ‘Tucu’ Correa, who entered for about ten minutes and was able to wet his debut in the Nerazzurri with a masterpiece of head on Darmian’s cross. Not happy, the former Lazio striker, before the triple whistle he also scores his brace personal, closing the accounts on 1.3 with a surgical left.handed in the corner.

Udinese beat Venezia 3.0 in the very first advance of the second matchday of Serie A. At the Dacia Arena the goals of Pussetto, Deulofeu and Molina decide, who gave Gotti his first championship success after the nice draw in comeback with Juve. To be postponed again, however, the conquest of the first points in the return to the top flight for Zanetti’s team, the second knockout in a row. The first great scoring ball of the match is built by the guests six minutes after the kick.off: Henry invents in depth for Johnsen, who runs away face to face with Silvestri but lets himself be hypnotized. The hosts respond in the quarter of an hour and go one step away from the advantage with Arslan, whose right diagonal is providentially saved in a corner by Lezzerini. Bianconeri who take courage, increase the engine revs and at dawn on 29 ‘they break the deadlock: Molina breaks through on the right and offers in the center for Pussetto, very good at controlling and electrocuting the goalkeeper with the right that is worth 1.0. In the second half the Venezia with the character tries to raise his head and in the 52nd minute he touches the par with Okoreke, good at juggling in the area and then finding the great response of Silvestri.
On the other hand, Udinese is one step away from doubling, indeed they would still find him with Pussetto, were it not for an offside by the same attacker on Makengo’s previous shot saved by Lezzerini. 2.0 postponed only in the 70th minute, when the newly entered Deulofeu places the paw of the knockout reiterating on the net a rejected by Lezzerini on Arslan’s shot. Second consecutive goal for the Spanish former Milan and Barcelona. In the end, Molina also participates in the party, who after the assist finds personal joy valid for the final 3.0.