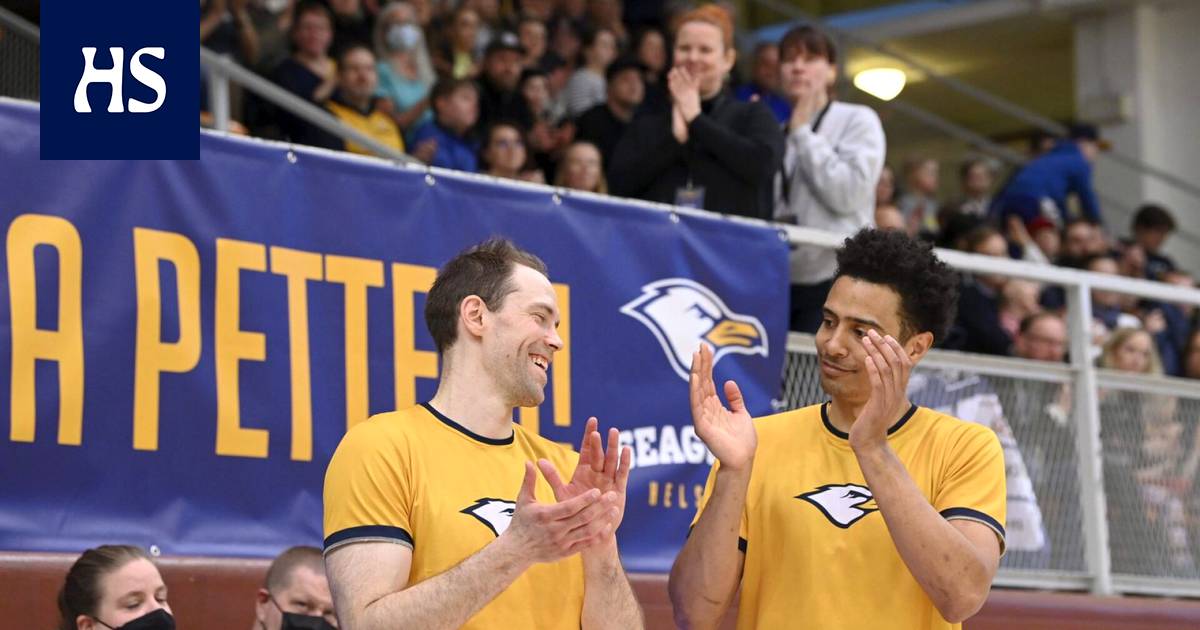 As the pre-bronze rituals dragged on, Shawn Huff kept the spectators engaged.

In 2021–22, the Helsinki Seagulls earned bronze in the basketball league. Kataja Basket of Joensuu lost 84-54 in the bronze match.

After losing in the semi-finals to Kauhajoki’s Bear Basket, the Seagulls were able to lick their wounds in front of their home audience. Even though the Helsinki team finished the season with a gleam in their eyes, the field was beaming after the bronze match.

The bronze medal was Seagulls’ fourth and second in a row in club history. For the third year in a row, the squad has won the Finnish Cup.

On an emotional Friday night in Töölö, experienced creditors of Seagulls and Susijeng Petteri Koponen34 and Shawn Huff37 called it a day.

Before the match, not only Seagulls and Korisliiga representatives, but also the first coaches of Koponen and Huff’s careers, Pekka Hartikainen and Tomi Kaminen, made a speech of thanks to the match for the party furniture.

After decades, Kaminen, who coached the young Huff, recognized his protector’s big smile.

“I’ve had the pleasure and joy of watching you grow up from a small child to the present day, and I’ve seen that you haven’t changed at all.” Not only has the length increased slightly. You are a happy, good person who thinks about everything. “This would be a pretty damn fantastic place if there were more Shawn Huffs in the world,” Kaminen added, making Kisahalli burst.

The start of the contest was about 20 minutes late due to the festivities. When Huff eventually got to the microphone, he drew comedy from the circumstances in his trademark style.

“When the speeches take so long, we’re going to need a new warm-up,” he grumbled.

Huff and Koponen lavished appreciation on their spouses, Tildaa and Lindaa, for allowing them to pursue a long career overseas as family men.

Before returning to Finland for this season, Koponen spent time touring the major iron series in Italy, Russia, Spain, and Germany.

When Koponen and Huff entered the arena, they were greeted with thunderous cheers. Image credit: Lehtikuva/Markku Ulander

Huff played in the Greek, Italian, German, and French leagues before joining Seagulls for a three-year stint.

Aku Perho, the Seagulls’ CEO, congratulated his veteran players for deciding to spend the final years of their careers in Finland. The duo’s impact as role models for young players cannot be overstated.

Koponen has won the Finnish basketball player of the year award eight times and was the first Finn to play in the NBA league’s opening round. Huff, on the other hand, has been the captain of Susijeng for a long period.

When the bronze match began, the Rally Hall DJ played the European song appropriately. The Final Countdown has begun.

Lauri Markkanen of the Cleveland Cavaliers, who had also arrived to see the historic event, was the first to throw the ball.

Huff scored a game-high 13 points and was the team’s second leading scorer behind Joe Lawsonin. Huff also collected seven rebounds and played the most minutes for the Seagulls.

Koponen played a little less than his buddy, and he didn’t perform very well in the farewell match. Three points, three assists, and four points were Koponen’s totals. Even with the medal, he smiled.

Despite the fact that their club basketball careers are gone, Koponen and Huff will practice with the national team this summer and compete in the European Basketball Championships in September. The tournament is the pinnacle of the players’ careers.