Milan to stay at the top from the Fiorentina gate 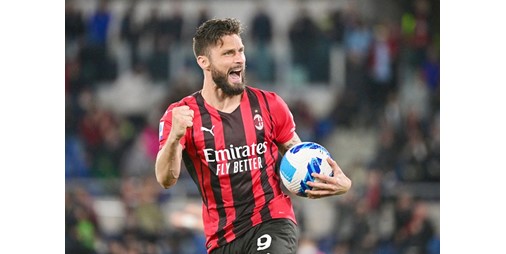 Milan hopes not to neglect the gift given to him by Bologna in the middle of the week in order to get closer to the title he has been waiting for since 2011, when it hosts Fiorentina in the thirty-fifth stage of the Italian Football League.

And the talk for many weeks was about this postponed match from the twentieth stage between the defending champion Inter and its host Bologna and the role it will play in determining the identity of the hero. Romanian reserve Ionut Radu.

No one from Milan could not believe what he saw in the 81st minute of Wednesday’s match when Croatian Ivan Perisic played the ball from a throw-in towards Rado, who was playing his first game this season due to the injury of the Slovenian Samir Handanovic. land owners.

As for Inter, he travels to Udinese before receiving Empoli to be a guest of Cagliari and end the season at home against Sampdoria, knowing that he is playing before the last two stages of the Italian Cup final against Juventus 11, in light of his quest for the local double.

Now that the talk about this postponed match is over, Milan hopes at least to maintain the two-point difference that separates it from “Nerazzori”, as it faces its guest Fiorentina in an appropriate time, because “Viola” suffers recently and will visit “San Siro” against the background of three defeats. Consecutive against Juventus 0-2 in the second leg of the cup semi-final, Salernitana 1-2 and Udinese at home 0-4 in the last two stages.

Juventus plays its guest Venezia, seeking to hold on to a glimmer of hope in order to stay in the top-flight league, but its chances are very weak, as it is at the bottom of the standings, five points from the safety zone.

The battle is raging between Roma and its neighbor Lazio for the fifth place that qualifies for the group stage of the “Europe League” competition, which is occupied by the team of Portuguese coach Jose Mourinho, and Roma plays its guest with Bologna.