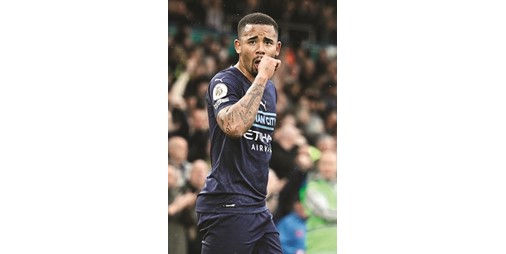 The cat-and-mouse game between Man City and Liverpool continued on Saturday at the top of the English Football Championship, after Liverpool won 1-0 away from Newcastle in the opening of the 35th stage and grabbed the lead for a few hours with 82 points, but “City” quickly regained the top with a sweeping victory over its host Leeds. With a clean four, to maintain a point difference from his opponent four stages before the end of the league, while Norwich City bid farewell to the elite clubs by falling to Aston Villa with two clean goals.

City, which is awaiting a decisive match against Real Madrid in Spain in the second leg of the Champions League semi-final next Wednesday (won 4-3 in the first leg), waited only 13 minutes before Spanish midfielder Rodri opened the scoring after an elaborate pass from Phil Foden, so he followed it with his head from Close distance into the net.

In the second half, the Citizens prepared the hosts by adding three goals, alternately scored by Dutch defender Nathan Ake, who winked the ball into the net after a header pass from the Portuguese Robin Diach (54) and the Brazilian Jesus after a strong shot from inside the area (78), before finishing Veteran Brazilian substitute Fernandinho scored the goals with a powerful shot from the outskirts of the area in the third minute of overtime.

There are 4 matches left against Liverpool, where it hosts Tottenham and is a guest of Aston Villa and Southampton, before it ends the season by hosting Wolverhampton.

As for City, they host Newcastle, then visit Wolverhampton and West Ham, and end their season at home against Aston Villa.

Pep Guardiola, coach of Man City, expressed his happiness with the great victory that his team achieved at the expense of its host, Leeds. “We knew before we came here their style of play, we suffered a lot in the first half, but in the end we controlled the game and we could score more, this is an unbelievable result for us,” he said, adding that I prefer to feel less pressure than I feel now, this Long season, this is the last effort.

In addition, Burnley continued his awakening recently and achieved his third victory in a row to get a little closer to the safety zone by overturning his failure against Watford to win 2-1.

The 35th round concludes with a meeting between Man United and its guest Brentford, and the team known as the “Red Devils” seeks to win and crowd out Arsenal, which is fifth (58 points), while Brentford hopes to score a victory that brings it closer to the top ten teams in the Premier League standings.