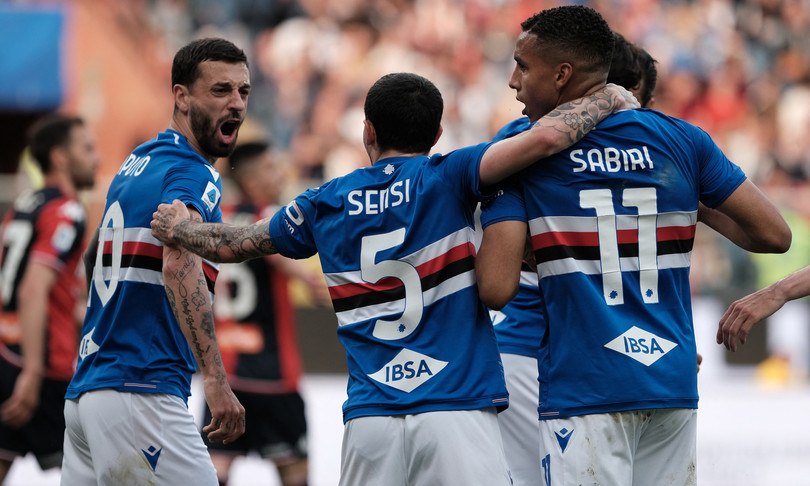 Sampdoria takes an important step forward towards salvation, sinking Genoa. The derby della Lanterna could have decided a good part of the fight for staying in Serie A: Sabiri gives Giampaolo three gold points, flying +8 over the rossoblùs and +5 over Cagliari with three days to go. Audero was also decisive with the penalty saved from Criscito in the 96th minute.

Tense game from the first minutes with a ball that has perhaps never burned so much in recent years in Genoa. The result is a physical, balanced match, with no big goal opportunities, especially in the first half. The first real blast of the dispute comes at minute 21 thanks to an insidious conclusion by Amiri, who commits Audero to a difficult reflex.

A few turns of the clock pass and on the other side Sampdoria becomes dangerous, finding the advantage: a perfect cross from Augello, on his first assist of the season, and a kick from Sabiri as a true striker in the 26th minute. Sirigu can do nothing.

Inevitably forced to increase the engine revs, Genoa responds in the half hour with a high right from Badelj and then with an oversized head shot from Ekuban. Blessin loses pieces and is forced to detect an already bruised Sturaro to insert a perky Portanova. The first fraction goes out on a header from Sabiri, miraculously thwarted by Sirigu.

At 50 ‘it is Ekdal, again on Augello’s service, who attempts a rejected conclusion. The score is blocked, time passes, forcing the Grifone technician to try everything with the changes. At 67 ‘double chance: the newly entered Criscito lets go a left-handed who ends wide, while in the following action Badelj kicks high.

The numerous interruptions, including those to remove the smoke bombs, do not help Genoa which is confirmed in alarming difficulty ahead. But a handball by Ferrari in full recovery could upset everything with the referee Maresca assigning the penalty after reviewing the episode at the Var: Criscito goes from the disk but is hypnotized by Audero, then bursting into tears. Derby at Sampdoria and salvation one step away for Giampaolo, Grifone on the edge of the ravine.