Rennes wins and settles third, and Lens escapes the loss 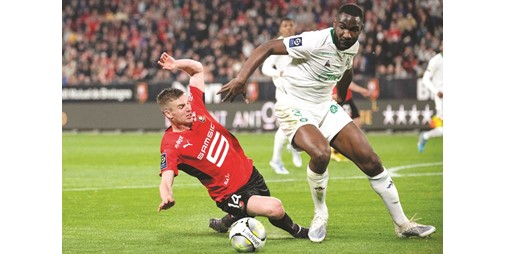 Rennes raised his score to 62 points, 3 points ahead of the fourth Monaco, which hosts Angers on Sunday.

Croatian Lovro Mayer opened the scoring four minutes before the end of the first half, before the player himself decided the result of the match in the 84th minute, raising his score to 5 goals this season in the French League.

In a second match, Nantes escaped with a victory that was within his reach because he advanced against his host Lens with two clean goals, scored by Messis Simon (8 and 32), and played with a numerical increase since the 19th minute to send off his opponent, Jean-Louis Leica, but the hosts managed to get out with a point thanks to two goals scored by Pereira. Da Costa (67) and Arno Calemundo (81 from the penalty spot).