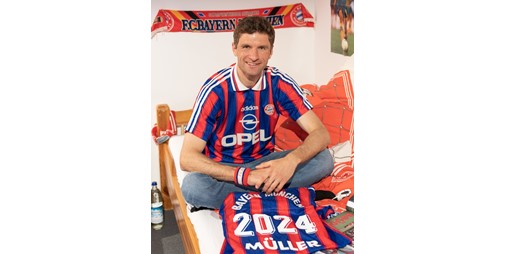 Thomas Muller has extended his contract with German champions Bayern Munich until 2024, according to what was announced Tuesday, when the international attacking midfielder is scheduled to spend his entire professional career with the Bavaria giants.

Muller joined Bayern, who finally won his tenth title in a row and 32 in its history at the age of 10 years.

“The journey we’ve taken together since I joined the youth team in 2000 has been a great success story so far,” said the 32-year-old international, who won the league title for the 11th time in his career with Bayern this season in a record.

“Let’s continue it together,” added the winner of the 2014 World Cup in Brazil, who played 112 international matches since his first appearance in 2010.

And Muller became the first player to extend his contract among the quartet, amid speculation that Lewandowski could leave at the end of the season for Barcelona as a possible destination.

The former goalkeeper and current CEO of German champion Oliver Kahn described the international player as “a personality who has an identity and carries the emblem of our club in his heart.”

“He’s someone who takes the lead, plus he’s an important figure with his style in the dressing room,” he added.

Since becoming a professional with Bayern in 2008, Muller has played 624 games, scored 226 goals and assisted 242 assists, and was part of the squad that won the Champions League twice in 2013 and 2020.