Real star Alaba and the CL miracle from Madrid: "This is insane" 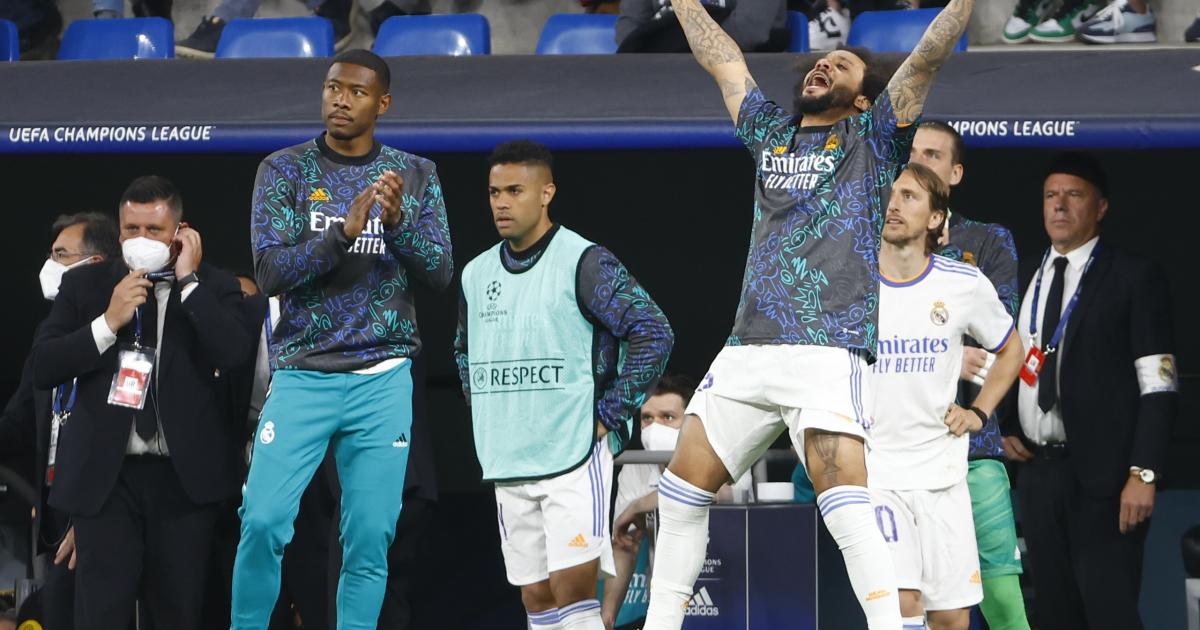 The injured ÖFB star followed the real madness against Manchester City on the bench: “Pure emotions.”

Real Madrid have invariably delivered drama with happy endings in the home knockout stages of this Champions League season. The climax of the three-act act came on Wednesday, when Spain’s record champions in the second leg of the semifinals against Manchester City seemed hopeless up to the 90th minute with a total score of 3:5 and still managed to climb up. Real had made similar comebacks against Paris Saint-Germain and Chelsea before.

In the duel with Man City, “Joker” Rodrygo struck twice at the end of regular time and brought the Madrilenians into extra time, where it was up to Karim Benzema, who had been outstanding in recent months, to lead his team 3-1 and thus into the final on 28 May. May shoot against Liverpool in Saint-Denis/Paris. After the final whistle, all dams broke at the Estadio Santiago Bernabeu, players and coaching staff hugged each other and let the frenetic crowd celebrate. In the middle was David Alaba, who had been on the bench because of muscle problems.

Due to his injury, the Viennese slowed down a bit during the cheering sprints in the fan curves, but in the midst of the happy dances the ÖFB star also found time to console the city professionals. There was also a heartfelt hug with Pep Guardiola, his former coach at Bayern Munich.

“Somehow you can’t believe it, but you can’t be surprised either. I’ve always emphasized what we’re capable of, we’ve shown that this season, we never let ourselves be discouraged. What the team has achieved, how she came back, that’s insane,” Alaba explained.

The ÖFB-International reported late on Wednesday evening about “pure emotions” and “pure relief”, emphasizing the “special character” of the Real team and revealing that he would have another beer. He showed great respect for the opponent in the final. “We know what season Liverpool are playing, it will be no easy task, we are aware of that.”

On their last lap of honor, the ÖFB international and his club colleagues slipped on white bodysuits with the number 14 on the back. Record winner Real has so far celebrated 13 triumphs in the Champions League or in the previous championship championship competition, the 14th is to follow in just over three weeks at the Stade de France. The chances are not bad – although Liverpool is currently the strongest team in Europe, the nerve-wracking title fight in the Premier League against Manchester City and the FA Cup final against Chelsea are still waiting for the “Reds”. Real, on the other hand, already has the championship under wraps and can take it easy in the last four league rounds.

Alaba will probably not take any risks in the near future so as not to jeopardize his recovery until May 28th. “I’ll recover from the muscle and prepare for the final as best I can.” Should the ÖFB international get fit as expected, he would contest his third Champions League final. He has won his two previous finals in 2013 and 2020 with Bayern. In 2010, Alaba was still in action in the semi-finals, but was not nominated for the final squad. In 2012 he was absent due to a suspension. Both matches were lost for Munich.

Alaba is now one step away from winning the most coveted club title with Real. For the Madrilenians it would be the first win of the handle cup since 2018 and the fifth in the past nine years. But you didn’t want to think that far with the “white ballet” on Wednesday, you preferred to enjoy the moment. “It was a fantastic night,” said coach Carlo Ancelotti.

His team was already 2-0 behind against Paris in the round of 16 and then won 3-2. In the quarter-finals against Chelsea, also at the Bernabeu, a Rodrygo goal in the 80th minute saved them into extra time, where Benzema finally struck decisively. The Frenchman now has 86 Champions League goals, drawing level with Robert Lewandowski in the all-time rankings. Only Cristiano Ronaldo (140) and Lionel Messi (125) are ahead of the duo. In the current Champions League season, Benzema has scored 15 goals, ten of them in the knockout phase.

Mainly thanks to the 34-year-old, Real has always been able to avert a seemingly certain departure. “In this knockout phase we felt like we were out 26 times and fought back 26 times. It’s hard to explain what sometimes happens in the last few minutes, even for me,” said midfielder Toni Kroos.

Ancelotti found reasons. “We sacrificed ourselves, we were lucky and had the necessary energy,” said the Italian. But even the coach wasn’t quite sure why his team had made another spectacular turnaround. “I think that happens through the players and also through the fans. Those fans always push us, not only in the stadium but also outside, even days before the games.”

A few months ago, Real was not one of the top favorites for the title in the “premier class”. “Nobody, really nobody believed that we would play a Champions League final this year. But we are there,” stressed Ancelotti. Since Saturday, the 62-year-old has been the first coach to win the championship in Europe’s top five leagues (England, Spain, Italy, Germany and France).

Now Ancelotti is waiting for his fifth Champions League final as a coach – no coach has ever managed this feat either. Should he lead Real to victory, it would be his fourth title, making Ancelotti the sole record holder. Only one final in the “premier class” ended in defeat for him. In 2005 he was 3-0 up with Milan in the final in Istanbul, but then lost on penalties – against Liverpool.

One thought on “Real star Alaba and the CL miracle from Madrid: "This is insane"”