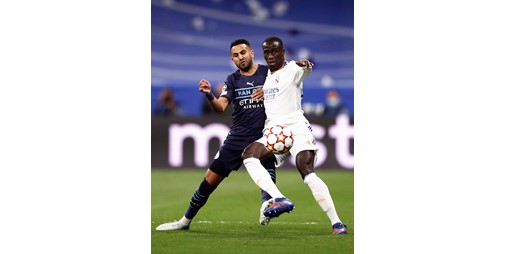 Real Madrid compensated for its delay with a goal to win 3-1 at home to Manchester City in the second leg of the Champions League semi-final on Wednesday, to set up a date with Liverpool in the final in Paris at the end of this month.
Real Madrid was delayed by the Algerian goal, Riyad Mahrez, in the 73rd minute, but the Brazilian Rodrigo equalized for the hosts in the last minute, and after one minute of stoppage time, the same player added the second goal, so the two teams resorted to overtime.
The two teams tied 5-5 in the first and second matches after the Premier League leaders won 4-3 in the first leg, before Karim Benzema’s goal came from a penalty kick.
Five minutes after the start of extra time, the French striker made the score 3-1 for Real Madrid with a penalty kick to lead the Spanish champions to the final, which will be held in Paris on May 28.

Yesterday, the Egyptian pharaoh Mohamed Salah, the Liverpool star, after qualifying for the Champions League final after overcoming Villarreal, wanted to meet Real Madrid to avenge the loss of the 2018 edition in Kyiv. His wish was fulfilled in an extraordinary way on a magical night.

Before the match, the Real Madrid fans raised a banner that read, “Another magical night for the kings of Europe.” They achieved what they wanted, and we will watch a repeat of the 2018 edition between Real Madrid and the Reds at the Stade de France in Paris on May 28.

The Italian coach was able to break the royal curse in the semi-finals if he lost the go after 5 previous times in a row. He lost the go and did not qualify for the final after 2001, 2011, 2012, 2013 and 2015, but he managed to lead the team to the final successfully and overcame the Manchester City obstacle, knowing that he overcame in the round of 16 the giant France team In the quarter-finals, Paris Saint-Germain also succeeded in overcoming the champion of the last edition, the English club Chelsea, to win over 3 of the European giants and among the candidates for the title.

One thought on “Real Madrid rises up, defeats Manchester City and hits”