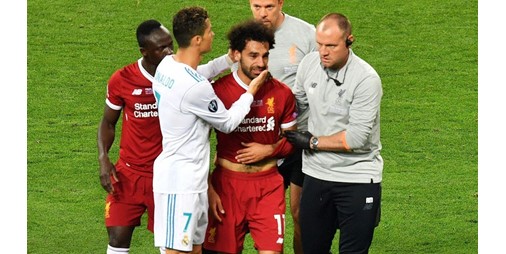 The Egyptian star Mohamed Salah, the Liverpool striker, warned Real Madrid, who set a date with him in the Champions League final at the end of this month, that “there is a settling of accounts” between the two teams, referring to his injury in the 2018 final between the two teams, in which the royal team crowned with a score of 3- 1.

Real Madrid dramatically overturned their 0-1 defeat against Manchester City until the last minute to win 2-1 in normal time and then 3-1 in extra time to set up a date with Liverpool in a revenge match.

Immediately after the match, Salah tweeted, “We have an account that must be liquidated.”

It is the third time that the two teams meet in the final after the first time in 1981 when the English team won with a single goal by Alan Kennedy. Paradoxically, that was the last final match that Real Madrid lost in the Champions League (in its previous and current form), if it reached the final seven times in 1998, 2000 and 2002 and from 2014 to 2016 and 2018 and won them all.

Salah had revealed, after Liverpool qualified for the Champions League final at the expense of Villarreal for the tenth time in his history, that he wanted to face Real Madrid in the final to compensate for the loss of the 2018 edition against the royal team when he suffered a severe shoulder injury and told the British “BT” channel, “Because we lost Final. I would like to face them again and hope to beat them.”

Salah, 29, was injured in the 2018 final when Real defender Sergio Ramos dropped him, preventing him from completing the match that Liverpool lost 1-3 and thus playing the 2018 World Cup in Russia naturally.

Liverpool became closer to achieving a historic quartet for an English club, after winning the League Cup, reaching the Cup final against Chelsea, the Champions League final, and moving away from Man City at the top of the Premier League four rounds before the end.

The Champions League final will be held at the Stade de France in the French capital, Paris, on January 28.