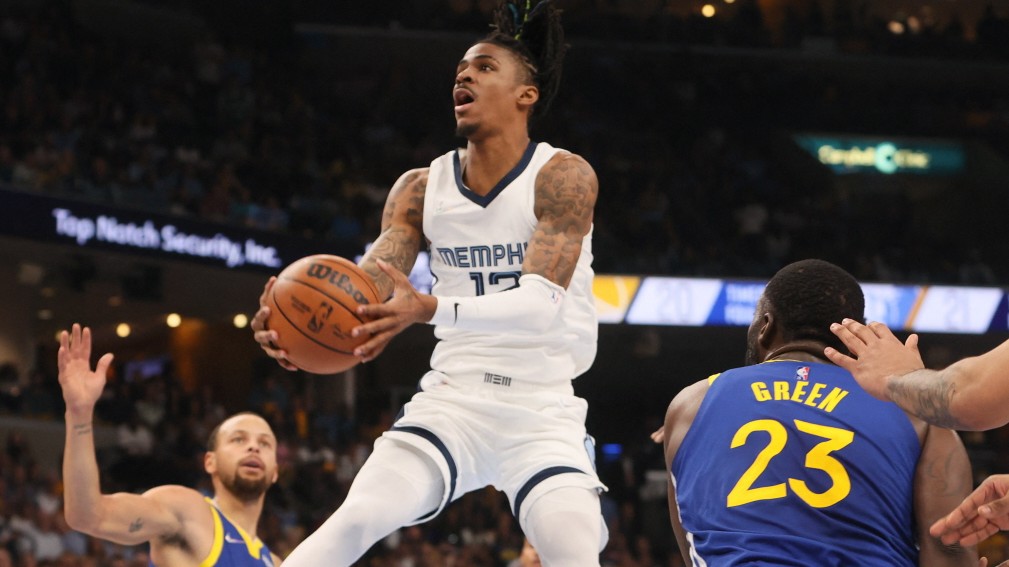 There is now this photo of Ja Morant; an image of suffering, like Jesus Christ in the arms of Mary Magdalene in the painting by Annibale Carraci: He is lying on a folding chair, the towel draped over his shoulders, his head thrown back to the side, his eyes closed. It’s a dramatic moment of the NBA playoffs, because this injury to the Memphis Grizzlies leader is actually given a meaning of biblical proportions – it’s about fundamental questions in basketball: When is a foul unsportsmanlike or even intentionally sneaky? And what can you do about it?

It’s a snappy best-of-seven series between the Grizzlies and the Golden State Warriors; During the first game, Warriors rooting buffalo Draymond Green was thrown off the floor for a rude foul – this also sparked debate. Two days later, Green had to have stitches over his right eye after an elbow bump, colleague Gary Payton had to go to the hospital with a broken elbow after being pushed from behind. Warriors coach Steve Kerr called the Grizzlies’ play “dirty”; Green announced that he too could play dirty – which, coming out of his mouth, sounds a bit like colleague Steph Curry saying that he too can throw a few balls in the basket.

Then, game four: Warriors point guard Jordan Poole pursues Morant, he wants to steal the ball but fails on the first try. He tries again, catches his opponent’s right knee and pulls it sideways backwards. Morant leaves the field, assumes the Pietà pose on the folding chairs, and then writes down Twitterthat Poole “broke the code”. So the accusation: Poole intentionally injured him or at least consciously accepted a bad injury. You don’t do that.

When is a foul really “dirty”? They are debating this after an action against Ja Morant in the NBA

He has since deleted the entry, but the dispute remains – mainly because Morant missed the fifth game on Monday evening, but Poole played. The Warriors won a terrifically exciting game 101:98, they lead 3:1 in the quarterfinals. They took the lead for the first time with 45.7 seconds to go, Curry’s marksmanship and Green’s defensive skills being the deciding factors – and of course, the Grizzlies’ lack of Morant.

In these playoffs he had delivered other pictures that cannot be compared with paintings, because not even the universal genius Michelangelo could have guessed that one day a person would be able to levitate without aids: Morant storms around the opponents like a Tasmanian devil; he also has the mane of a Tasmanian devil, with colorful dreadlocks in it. Then he takes off and, completely detached from the earth, Ja Morant levitates, completely weightless. He defies the laws of physics, with his body, but also with the flight curves of the ball, which he maneuvers into the basket from the most unusual angles.

Anyone who sees Morant gamble must think of Michael Jordan, whose limbo logo is a world-renowned brand. From Allen Iverson, the NBA’s last true street basketball player, to Morant, whose history serves as a clue that not everyone starts at the age of three. And from then on, subordinated his life to the professional sport dream before investing a mid-six-figure amount in private lessons.

Morant is a spectacle because since being named Rookie of the Year in 2020, he’s professionalized gambling and added weapons like long-range throws. The style of play is exciting, but also dangerous because he is constantly being attacked by several opponents, colliding with other players when flying over and often landing unbalanced.

The NBA is marketing this spectacle, protecting its players with stricter rules than in the 1980s, when opponents could be bar-brawled off the field without fear of suspension. But she also doesn’t want to come off as a wimpy league where nothing is allowed anymore; hence the dreadful term “playoff foul”. That should mean: Now that the title is at stake, you can play a little rougher, even if the official rules don’t say anything about it – but what exactly does that mean? That’s what the debate is about and also the “code” that Morant mentioned after his injury.

So, when Green tugs at his floating opponent’s jersey; when Grizzlies-Canadian Dillon Brooks the jumping warrior Gary Payton jr. pushes from behind; the elbow in Green’s face; Morant’s twisted knee: could it be intentional unsportsmanlike behavior or “playoff fouls”? There is no answer because there are no clear rules, everyone interprets it differently. The referees decide after viewing the videos. They are criticized for it – no matter how they interpret the regulations. The gray area for “playoff fouls” is as big as the playing field. The NBA should urgently downsize them, in the interest of all involved.

Morant watched this fourth game from behind his Grizzlies’ bench, gray sweater, hood over his head. The pose: sad, arms crossed over chest. He looked like Francis of Assisi in the Carraci painting. It also features an angel with wings ready to fly. Morant could be operational again for game five on Wednesday.

One thought on “Foul on basketball player Ja Morant: Debates about the greatest NBA spectacle”