20 things to know about Carlo Alcaraz, the new tennis phenomenon 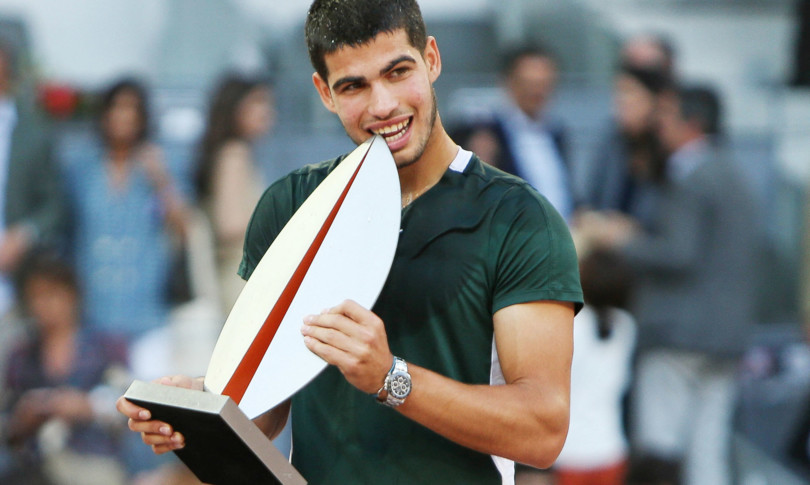 At the age of nineteen, the tennis player who, getting rid of Nadal, Djokovic and Zverev in a row, has just signed the Madrid tournament, is preparing as world number six to sit on the throne of world tennis. Here, in twenty points, all about the Spanish from the bimane backhand, who turned professional in 2018.

Born in El Palmar (Murcia) He started playing in his father’s tennis school when he was three years old, inspired by Nadal. At the age of ten he is already the under 10 regional champion. Now after the victories in Miami, Barcelona and Madrid, he is number six in the world.

2) The three Carlos of the family

Carlos’s father, Carlos Alcaraz senior, was the head of the tennis school of the Club de Campo in El Palmar, Murcia. Location to which Carlos jr dedicated the victory in Madrid. His grandfather is also called Carlos, one of the oldest members of the Campo El Palmar club

Papa Alcaraz was a pro tennis player of no exceptional level and left his career due to lack of financial means. It was no. 42 of Spain and says Sergi Bruguera, he always took the ball. The same Bruguera who on Sunday watched the son of his favorite victim overwhelm his assisted Alex Zverev in 50 minutes. Carlos sr decided how to behave with his son by looking at Bruguera himself: “He and his father Lluis were constantly clashing: I understood that with my son, on the other hand, I should have got along. This is why I have never been his coach ”.

Its first sponsor was Alfonso Lope Rueda, managing director of “Postres Reina”, a Murcian company of sweets derived from milk. It was thanks to him that Carlos Jr was able to go to Pula to play a Master under 10 at the age of 10.

One of Carlos’s three brothers, Jaime, at 12 is already forging ahead. Carlos recently performed doubles with him in a tournament in Greece.

The former world number one who won Roland Garros when Carlos gave his first cry, has been following him since he was 15, at his Equelite academy in Villena. “He changed my life, I evolved with him: I gained muscle, I grew up, I became tougher on the pitch,” said Carlos.

His home is a 25 square meter prefabricated building (two bedrooms and one bathroom) in the area of ​​the Equelite de Villena Academy in Alicante, where he lives and trains six hours a day. Alongside him live other members of Juan Carlos Ferrero’s team

He is followed by a staff of ten people including sparring partner, physical therapist, mental coach and, among others, the nutritionist.

He loves to train his body with barefoot exercises on the sand. But he does not neglect rope climbing either.

One of his secrets is the traumatologist: his name is Juanio Lopez and he healed the arm tendon that gave him so many problems last year with platelet-enriched plasma.

He has a psychologist who he meets periodically and who takes care of his mindfulness: her name is Isabelle Balaguer. Until two years ago, Josefina Cutillas followed him. Her secret is that she doesn’t stop too much thinking about wins and losses, she doesn’t allow emotions to last longer than it takes.

Carlos is a big fan of golf. Passion that he shares with the coach Juan Carlos Ferrero.

Eat rice and fish the night before a match. An hour and a half before taking the field he energizes his body with a cocoa cream. In his diet also dates and olive oil. He weighs 72 pounds and is 1.85 tall.

His favorite dish is the stew prepared by mother Virginia accompanied by pringà: eat the meat by mashing the bread in the sauce. In short, a Spanish-style “shoe”.

No Nadal-like tics but a series of superstitions: he chooses a shower at the beginning of the tournament and then always tries to wash himself in that. As with the bag, always left in the same position and the outfit: “If I start a tournament with a suit, I finish it with that”.

During the pandemic, the young Carlo passed the time by putting together a puzzle of 5,000 pieces.

Another great passion, chess: he claims that chess practice helps him to train concentration and create winning strategies on the tennis court: “In chess as in tennis, if you get lost for a moment you risk getting confused”.

To date he has earned $ 5 and a half million from tournaments alone. Her parents, Carlos and Virginia, manage them.

Everyone approaches him, if only for nationality, to Rafa Nadal: but he, as a fan, prefers the game of Roger Federer.

One thought on “20 things to know about Carlo Alcaraz, the new tennis phenomenon”