Father abducts Sonia Grönroos abroad, and daughter still pays the price of the abduction – “My childhood has been much harsher than I thought” 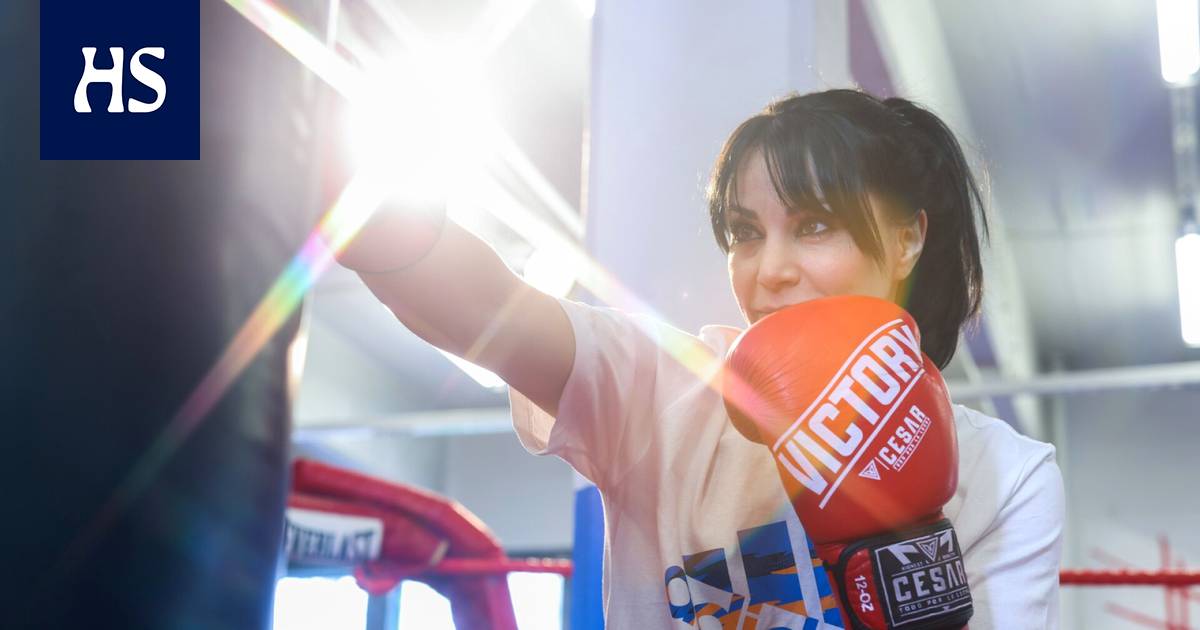 Boxer Sonia Grönroos starved as a child on the streets of France when her father abducted her child. Now the mother of two is making sure the fridge is never empty. A new book about Grönroos sheds light on his childhood for himself as well.

In the boxing hall is a terrible uproar. Sonia Grönroosia laugh, kids Arya and Isabella running and glistening. The father of children Jose Sanchez Romero trying to detain children to allow the mother to focus on being portrayed.

Grönroos kisses and hugs his daughter. Arya is soon four years old and Isabella is one and a half years old. When Grönroos looks at them, his own childhood sometimes comes to mind. Then the heart whistles.

Grönroos is a Finnish boxer whose book is about his life Straight to the heart appears on Wednesday. His year of success was 2013, when he won the Finnish and Nordic championships and EU silver.

I also have a part in the book, as Grönroos and I are old training buddies and competitors.

And the “fatherless half-hearted” as the book states.

Family is one of the biggest themes in the book. Grönroos missed it as a child and young man, later boxing offered it. Now she has her very own family from which to suck love.

For my own childhood, Grönroos is like a puzzle made up of different stories and vague memories. Author Stella Vuoma has done a great job figuring out the early stages of Grönroos’ life.

The book project has also brought painful surprises to its protagonist.

“My childhood has been a lot harsher than I thought. Maybe I’ve protected myself, or maybe I didn’t want to be told everything so it wouldn’t hurt any more, ”he ponders.

When Grönroos was the age of his younger daughter, Grönroos’ father abducted him and his brother abroad. The siblings were in their father’s home country of Algeria until the mother agreed to continue the marriage with the father. Grönroos was so small at the time that he remembered nothing of those times.

While Grönroos, the age of his eldest daughter, lived with his brother in an unknown Tunisian family in France. Dad and mom were divorced. The children had ended up with their father again, but the father was away for a long time.

Grönroos doesn’t remember how long that period lasted, but he remembers the constant hunger and angry man.

The siblings spent their days on the street and got food if left over.

Grönroos returned to Finland with his brother when he was six years old. Thanks for returning, the principal of a small French school who had contacted the Finnish embassy.

“My brother had possibly had a conversation with the school teacher and told me that we are half Finnish. The teacher was definitely worried when we had the same clothes all the time, we smelled bad and we were treated badly. ”

“I thought he was looking for us all the time.”

Mum came with his then-male friend to pick up the children home. The children did not speak Finnish, and Grönroos did not even recognize his mother.

It has not even been clear to Grönroos where all that has happened. With the making of the book, a familiar school yard was found in the village of Remoulins using a map application.

Other facts have come up. Grönroos has been in the belief that before contacting the French school, their mother did not know where the children were. But apparently this was not the case.

“I had thought he had been looking for us all the time, but maybe that’s a memory that’s been told to me. A lot of things have also been wiped out, probably because they don’t weigh too much. ”

Childhood has left its mark. It is important for Grönroos that the refrigerator is never empty. He also doesn’t like the idea of ​​children going to Spain to have sex without him.

Sometimes Grönroos’s mind creeps into thought: what if he had never been brought back to Finland?

“I’ve often wondered how we would have survived domestic violence. Would Dad come back, would we have continued living with him, or how would we have done? ”

The distances to both parents exist, but the parents are reluctant to recall the times that have left Grönroos with questions. The closest family member is a brother. Grönroos believes that without a brother, childhood experiences could have been much more damaging.

“I’m glad Maru was there, there was safety. I don’t know what would have happened if I had been alone. Surely my self-esteem and everyone would have suffered more. ”

“The daring decisions got adrenaline.”

Sen after Grönroos came to Finland at the age of six, his life began to run on comfortable tracks. There was a school and friends as well as a teacher who encouraged me to do gymnastics. And best of all, it was a normal everyday life. It took a while.

Then the family moved from Vantaa to Pirkanmaa to Kylmäkoski. Shortly thereafter, Grönroos’ mother and her husband divorced. Grönroos adapted to the new place and found friends and a hobby of dancing, but at home the situation went in the wrong direction.

A new stepfather had entered the house. The family’s common routines, such as eating moments, were left out. The home was raging with drunkenness, and Grönroos didn’t want to go there.

“I didn’t want to be there because I wasn’t wanted there.”

Teen years followed by a period of restlessness and full of travel. Grönroos became acquainted with his relatives living abroad and worked in various short-term employment relationships in Finland and around the world.

The problems he was not willing to face, they were easier to just leave behind. Thus, in retrospect, Grönroos realizes that he was quite Irresponsible.

“I have survived in the way that I have ruled out all the unpleasant things and thought that I would do well and then take care of them sometimes. And I still pay for that thinking. ”

The turbulent period was interrupted by sports. The boxing hall offered routines and a “boxing family,” on the other hand, the sport satisfied the inner adventurer.

”I got adrenaline from traveling and daring decisions. Boxing brought it without having to go anywhere for a rampage. Boxing is also a bit adventurous, but everyday life remained calm. That was the best. ”

His gymnastics and dancing background helped him to embrace boxing quickly. In five years, he had made his way to the national team and achieved EU silver.

“Boxing was a dream profession for me.”

Sonia Grönroos dreamed of the Olympics, but her career ended in 2014, wounded by injuries. Picture: Luis Bustamante / H.S.

Intensive the practice retaliated, and the injuries followed one another. His career ended at the World Championships in Jeju, South Korea in November 2014, when the body couldn’t stand the warm-ups any further.

Since then, Grönroos has tried to return to the ring, and it is still lurking in his mind. In between, however, there have been health problems and starting one’s own family.

Jose Sánchez Romero was visited by Grönroos at a training camp in Spain. Sánchez Romero is also a boxer, and in a family of two strikers, both support each other towards sports dreams.

“Boxing was a dream profession for me, and it was interrupted. It is badly left in the tooth cavity. I have been trying to get back in the ring for eight years now. It already sounds almost silly, but Jose supports me. She always says I’m the best boxing woman she’s ever seen. ”

“It’s wonderful when he sees a boxer in me.”

Jose Sánchez Romero and Sonia Grönroos support each other towards athletic goals. In a family of two boxers, the parents arrange time for each other to work out, and sometimes the whole family is in the gym. Picture: Luis Bustamante / H.S.

Boxer identity alongside is the role of the mother and the concern for the family. Grönroos, who suffers from heart symptoms, says he has a booklet at home in which he records important information about dealing with children and practical matters.

“For sure, if anything happens to me.”

He has also noticed that he fears more for his wife when Sánchez Romero fights.

Unfortunately, Grönroos has noticed that motherhood has also changed people’s attitudes towards her in the boxing hall.

“Some coaches think I have two kids and have already, as it were, made the decision for me to quit already. But it’s my choice whether to continue or stop. ”

Now, however, he has found a coach who believes in him.

“It’s wonderful when he sees a boxer in me.”

Bridge At the moment, Grönroos is supporting his wife towards the EU Professional Championship, which has already moved several times. With these prospects, that match will finally take place in the summer in Savonlinna.

Maybe after that it would be Grönroos’ turn again. He is now 38 years old. In Olympic-style boxing, the age limit is 40 years. Grönroos still dreams of winning Finnish Championship gold and why not something more, but boxing no longer takes precedence over health.

And boxing cannot be deprived of Grönroos, even if he never enters the race again.

“I’m a boxer. I have found my own thing, and it is present in my life. Jose is boxing, the kids are boxing. It is a part of me and will always be a part of my life. ”

Sonia Grönroos dreams of returning to the ring, but sports no longer take precedence over everything. Picture: Luis Bustamante / H.S.

Stella Vuoma: Straight to the Heart – The story of boxer Sonia Grönroos (Like Cost) will be published on Wednesday, May 11th.

One thought on “Father abducts Sonia Grönroos abroad, and daughter still pays the price of the abduction – “My childhood has been much harsher than I thought””