VfL Gummersbach: Germany’s most famous handball club is back 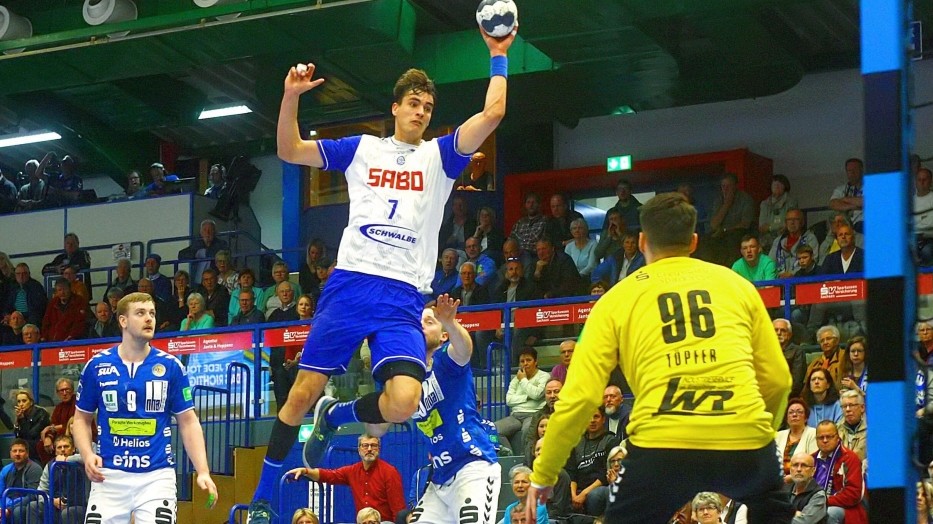 Tuesday was a day off in Tino Costa’s pizzeria. The favorite Italian of the VfL Gummersbach handball players was there as a noble fan when the team met in the Greek restaurant “Bit Boulevard”. There are just as many handball photos hanging on the walls there as over there in the restaurant.

The handball players had a hunch. Nobody should have been sitting at home alone on the sofa that evening. While eating together, they watched handball on TV, and when the game between TV Großwallstadt and promotion rival ASV Hamm-Westfalen ended 27:27, everyone jumped up, danced through the bar and put on T-shirts that said: ” Back home – first class in the future.”

VfL Gummersbach is perhaps still the most famous German handball club. When his return to the Bundesliga was perfect after a three-year second division interlude on Tuesday evening, there was unfortunately no rain of confetti and no wave of spectators in the home hall in the Oberberg district east of Cologne. They will catch up on Saturday against Ludwigshafen. The father of this success is Icelander Gudjon Valur Sigurdsson, a coach who used to be an Olympic finalist as a left winger, winner of the Champions League and champions in five countries eight times, but who is still at the beginning of his career as a coach. After Gummersbach’s first second division season 2019/20 was rendered obsolete by Corona, Sigurdsson started his job. He already knew the city, having played here himself from 2005 to 2008.

Heiner Brand, 69, club icon and winner of 17 titles with VfL Gummersbach, lives just five minutes from the hall and has also gone to games in the second division as often as possible. He thinks the young manager Christoph Schindler, 38, and the young coach Sigurdsson, 42, are doing really well and he praises how they have breathed new life into the 99-year Gummersbach handball history. Schindler played for VfL from 2010 to 2017 and then seamlessly switched to management. “He has taken on a big task,” says Brand, “but he’s doing it very confidently.” Sigurdsson is also showing good development as a coach. “His handball is attractive,” says Brand, “he gave the team a face and the atmosphere in the team is very good.”

The sporting upturn was urgently needed, because the times when this VfL Gummersbach made its name are long ago. Between 1966 and 1991 the club won twelve league titles, five cup titles and ten European cup titles. Then, in the city of 50,000, self-destructive attempts began to force comparable successes in an increasingly expensive handball world with risky financial investments. The club faced ruin several times, most recently in 2019 when they were relegated from the Bundesliga and when many in Gummersbach believed that this was the last nail in the coffin for Gummersbach handball.

Manager Schindler, who had only been in office for two years at the time, says today that the only reason he often didn’t wake up in the middle of the night because he wasn’t able to fall asleep in the first place. Why a young man is saddled with this job; why is he doing this to himself? “Because I love this club,” says Schindler. This is the reason why VfL Gummersbach is still alive and why it is now returning to the Bundesliga instead of disappearing into nirvana. Many have helped with the rescue because they love this association. “VfL Gummersbach belongs in the handball Bundesliga like Schalke 04 in the soccer Bundesliga,” says club legend Brand.

Schindler even claims that the relegation three years ago was “good and important” for the club, because other than with the drastically lowered expectations, a fresh start could not have been done at all. Schindler denies that everything is now rosy again and that they are even exclaiming lofty ambitions. “We’re still consolidating,” he says, “so our goal can only be to stay up.”

The goal now is: Don’t get off again immediately

Sigurdsson has extended until 2025. He was brought in with the aim of developing young players. Julian Köster, 22, and the Melsunger loaner Ole Pregler, 19, for example, the coach has formed relevant factors in the Gummersbach game. “He’s doing brilliantly,” says Schindler about Sigurdsson: “He exemplifies his winning mentality and is first in the hall in the morning after running ten kilometers or spending two hours in the weight room; that makes an impression on the boys.” What Schindler noticed positively: “Goggi is really never satisfied.”

Maybe that’s one of the reasons why the Gummersbachers don’t go to the Bundesliga with the euphoric identical squad, but make an unexpectedly big change. At least six players are leaving the club, including captain Fynn Herzig, who is moving to HSC Coburg and staying in the second division. Middleman Dominik Mappes from TV Hüttenberg, backcourt player Tom Jansen from TV Großwallstadt and the Slovenian left winger Tilen Kodrin from Celje have been confirmed as newcomers. “It’s always about thinking three steps ahead,” explains Schindler.

“Julian Köster and Dominik Mappes were the best offensive players in the second division this season,” says Brand and is looking forward to seeing them next season in the arena on Heiner-Brand-Platz. “Here in Gummersbach there is enthusiasm again,” he says, “I never thought that something like this would be possible here in the second division.” Brand also sees an educational effect: “Perhaps the three years here have made everyone think about the fact that the Bundesliga is not a matter of course – and that the top priority for the next season must be not to be relegated again.”

One thought on “VfL Gummersbach: Germany’s most famous handball club is back”