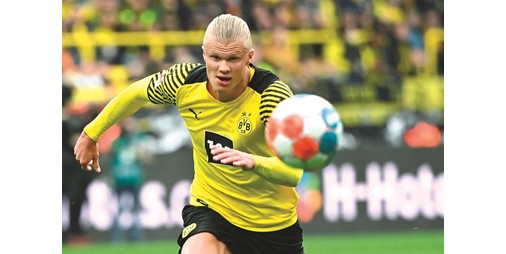 Man City, the leaders of the English Premier League, announced yesterday, in a statement, that it had reached an agreement to sign Norwegian striker Erling Haaland from Borussia Dortmund, starting from the first of next July.

“The deal will be settled once the club reaches a final agreement with the player regarding the terms of the contract,” the club added.

City did not mention the financial details of the deal, but German media reported that the total cost of buying Haaland in a multi-year contract could exceed 300 million euros, including his salary, agent fees and bonuses.

The 21-year-old Norway striker has greatly increased in value thanks to his impressive form with Dortmund after joining from Austrian Salzburg two years ago.

In addition, a news report stated that German striker Karim Adimi was at the German football club Borussia Dortmund in order to undergo the necessary medical examinations in preparation for his inclusion in the team.

And the “Sky” TV network reported that the Austrian club Red Bull Salzburg, for which Adeymi plays, allowed the player to undergo these medical examinations before announcing the official settlement of the deal.

The value of the deal ranges between 30 and 40 million euros, and the player will sign a 5-year contract that ends in 2027.

Adeyemi is expected to strengthen the Borussia Dortmund attack line, in light of the expected departure of Haaland from the team to join Man City.

One thought on “City agrees with Halland”