Atleti crosses Elche on a special night for Simeone 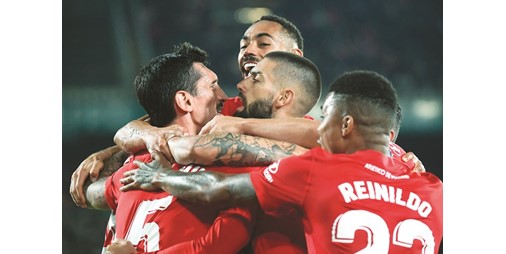 The match that Atletico Madrid won against its host Elche 2-0 in the 36th stage of the Spanish Football League was the 400th match in the “La Liga” in which Diego Simeone leads the team.

Simeone attributed the credit, in remaining at the head of the technical staff of “Atleti” for all this time, to the work done by the players.

Simeone said after the match: “It is an important moment because without the players who have been through the team for all this period, it would have been impossible to reach this number. I am grateful and lucky that the club has always supported me.

The success and failure are there, but I thank the players who were here during that period and without whom I would not have reached this point.”

And two stages before the end of the season, Atlético Madrid raised its score to 67 points, compared to 66 for Seville, six points ahead of the fifth Real Betis, but it ensured its qualification to the main continental competition even if it lost the last two games thanks to its superiority in the two direct confrontations over Betis.

During the 11 years that Simeone coached the team, he managed to break the dominance of Barcelona and Real Madrid, winning the Spanish League twice, the European League and the European Super Cup, and winning the King’s Cup on one occasion.

In another match, a goalless draw took place against Seville and its guest Mallorca, and Deportivo Alaves beat its guest Espanyol 2-1, and Getafe drew with its host Osasuna 1-1.

And tomorrow, Saturday, the matches of the 37th and penultimate stage will start, where Espanyol will meet with Valencia, and Celta Vigo with Elche.