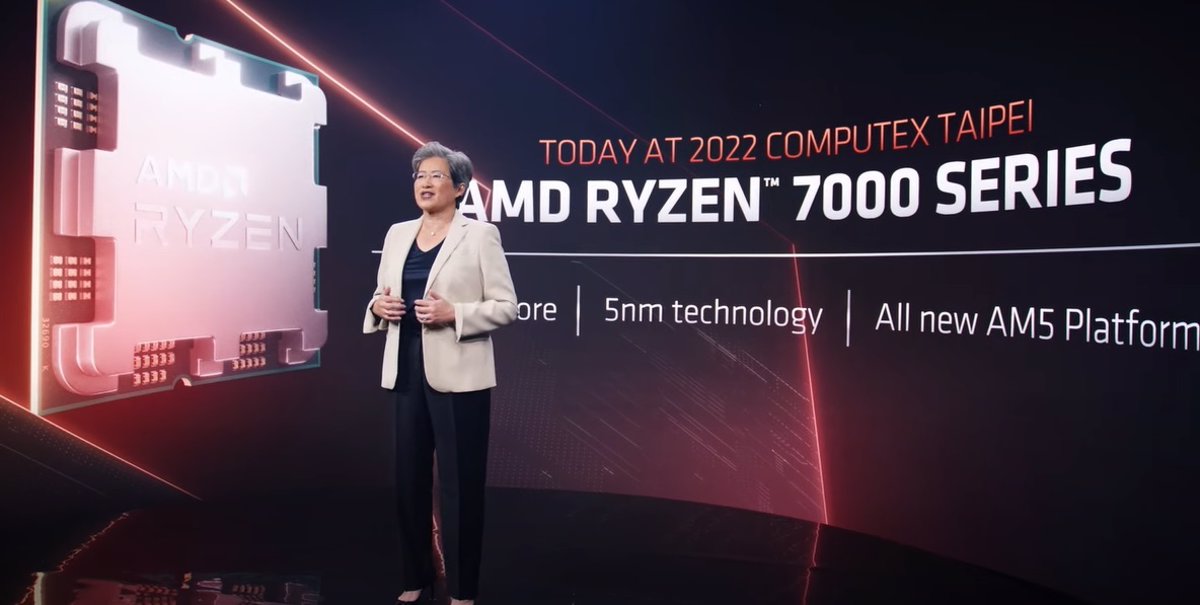 AMD has introduced the Ryzen 7000 desktop processors with the new Zen 4 architecture and based on a 5 nanometer (nm) manufacturing process, which promises a significant increase in performance and is expected to hit the market in the fall of 2022.

The American semiconductor company has announced within the framework of the Computex 2022 fair, held in Taipei (Taiwan) between May 24 and 27, some of its novelties that will arrive in the coming months and has subsequently detailed in a statement.

The great star of the AMD conference has been the presentation of processors for desktop computers Ryzen 7000 Serieswhich will integrate the new architecture Zen 4 of the company.

These new processors promise a 15 percent single-core performance improvement over the previous desktop generation, the Ryzen 5000. In addition, AMD has announced that the Ryzen 7000’s L2 cache has been doubled to allocate 1MB to each core. of cache.

The imminent Ryzen 7000 stands out as the first in the industry to use the 5nm manufacturing process, used so far in mobile devices. AMD also points out that they will have integrated RDNA 2 graphics and a new 6nm I/O chip, as well as support for DDR5 and PCI Express 5.0 for up to four monitors. It is expected to launch in the fall of this year.

AMD has carried out a demonstration during its conference. In it, a desktop team has been shown playing the title Ghostwire Tokyo. During the test, the new processor has reached a clock speed of 5.5 GHz. In this sense, AMD has ensured that the Ryzen 7000 is 30 percent faster than the Intel Core i9 12900K “in a workload of Blender’s multithread rendering”.

The announcement of the Ryzen 7000 has been accompanied by the presentation of a new platform, the AM5 ‘socket’. Featuring a 1,718-pin LGA design, it features TDP support up to 170W, dual-channel DDR5 memory, and SVI3 power. In addition, it integrates up to 24 PCIe 5.0 lanes and is compatible with both current and future graphics cards and storage.

AMD has explained that this new platform will have three different levels of motherboards. On the one hand, the X670 Extreme with PCIe 5.0 support for two graphics slots and one storage slot.

For another, the X670, with PCIe 5.0 support in one storage slot, and optional graphics support. Finally, they are las B650which have been designed to be compatible with PCIe 5.0 storage.

The company hopes that this technology of new motherboard models will be used by partners such as Asrock, Asus, Biostar, Gigabyte y MSCI. In addition, it anticipates PCIe 5.0 storage solutions based on it from other companies, such as Crucial, Micron and Physon.

MENDOCINO, THE NEW IN MOBILE PROCESSORS

AMD has also presented its new mobile processors, the Mendocino, which integrate cores with Zen 2 microarchitecture and graphics based on the RDNA 2 architecture.

The company anticipates that the first systems with these new processors will arrive from the last quarter of the year, and will be priced in the United States at between 399 and 699 dollars.

laptops with systems AMD Advantage they are especially oriented to ‘gaming’ and include ‘smart’ technologies from the company that allow the team’s CPUs and GPUs to work together. Thus, system bottlenecks are eliminated and maximum performance and efficiency are sought.

AMD’s latest announcement has been the new member of this family of ‘smart’ technologies, SmartAccess Storage, which is compatible with Microsoft DirecStorage and employs the company’s Smart Access Memory technology (among others), to help reduce load times and speed up texture streaming. It is expected to arrive in the coming months.

The new AMD Advantage systems are, meanwhile, available to various original equipment manufacturers (OEMs) from Alienware a Asus, Lenovo and HP. AMD adds that Corsair It also plans the launch of its first laptop for gamers and streamers designed exclusively with AMD Advantage.