Twitter tests the option to ‘untag’ the tweets that mention them 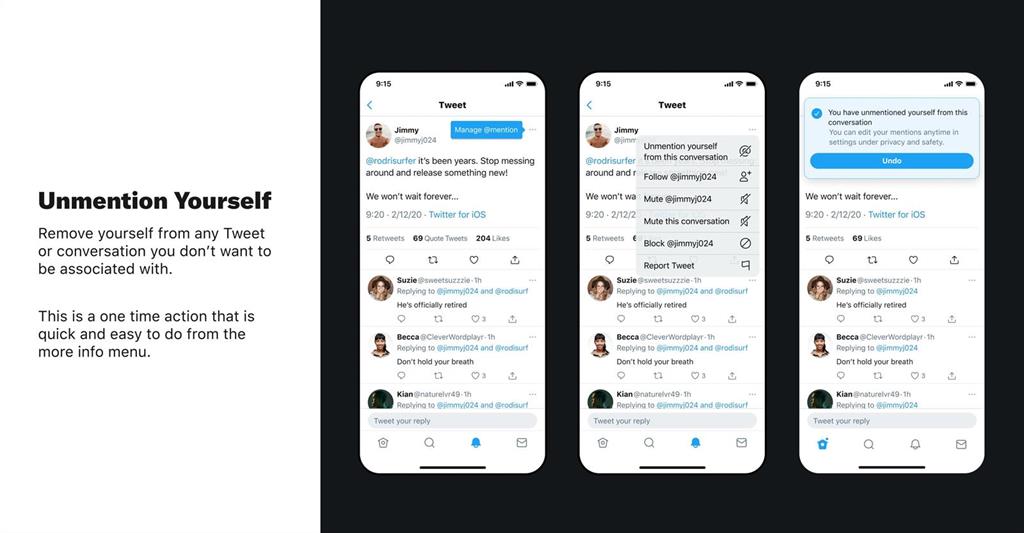 The ‘microblogging’ platform Twitter is developing a new function with which it allows its users to ‘untagged’ in the tweets of other accounts that have mentioned them.

The new function of Twitter aims to give control to users of the social network to disengage from conversations you don’t want to be a part of, as Twitter privacy designer Dominic Camozzi has reported in his personal account.

The ‘untag’ button is shown when a user has been mentioned in someone else’s tweet, and the option is in the more information menu that accompanies each publication, illustrated by three points.

The function makes the link to the user’s account stops appearing in the tweet, but the person who made the original post is not informed of this, as screenshots of the still-in-development feature shared by Camozzi have shown.

Sometimes you want to talk, and sometimes you just … don’t.Check out these early concepts that could help control unwanted attention on Twitter.Feedback, especially at this beginning stage, is invited (and wanted)! ?? pic.twitter.com/6SpzqiwFlL

In cases where, after receiving one of these special notifications, the user chooses to untag the tweet, the Original author will not be able to re-tag this person in the future.

Twitter settings also allow users to manually select which accounts are restricted from mentioning them in your posts. In addition, it offers the possibility of block all mentions for a specified time (one, three or seven days) by way of rest.

Another feature in development seeks to control when a user begins to be mentioned in bulk. First, they receive a notification to let them know, and then they have the option to review them and change their notifications to control the situation.