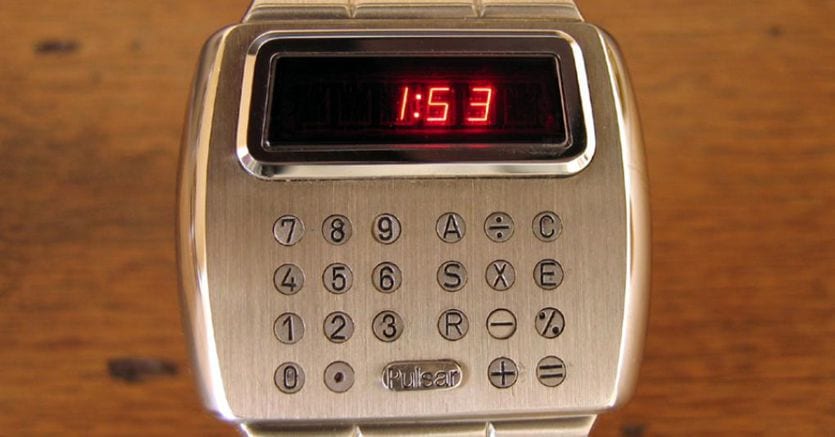 In 1972 the Hamilton Watch Company announced the Pulsar Time Computer. It was the first digital watch, it cost 2100 dollars and had a black dial with red LEDs. At the time, the watch market was considered, among other things, a preview of what the home PC industry would be like in the 1980s. It is no coincidence that there are those who consider that the date from which to start talking about wearable technologies. As the name suggests, wearable technologies originated as gadgets that can be worn. At first they were small miracles of miniaturization, sometimes sometimes clumsy attempts to upgrade traditional objects and in most cases forward escapes for science fiction movie fans.

The wristwatch with calculator can be considered the first consumer wearable device to achieve global success. The paradigm shift, as the technological observers say, we have it with the mass production of sensors and the use of the web to transmit, record and analyze data. Here comes the first Bluetooth headsets in 2000 and four years later the first GoPro that effectively marks a watershed. The original version designed by Nick Woodman, however, is quite different from the one we know today and we see connected to the helmet of a cyclist, skater or motorcycle racer. It attached to the arm, had a waterproof case and used 35mm film. Woodman wanted a product that would make it easier to take photos while riding the waves on the surf. He did not imagine that this type of device would also be used to film people in normal situations.

The arrival of Google Glass

The invasive potential of wearable technologies has been more intelligible with Google Glass. When they came out, protests were unleashed by associations for the protection of privacy, human rights and democracy. The device designed by Google in 2013 was the first head.mounted voice.activated display product to combine hands.free internet access with augmented reality and the ability to capture images. This last aspect, the possibility of filming those around us was what attracted the attention of the Privacy Guarantors in Europe. The Facebook Ray.Ban Stories are a more fashionable and social version of Google Glass. They arrive nine years later in the era of TikTok and Twitch. Technology is invisible and finally wearable without looking like cyborgs. The glasses designed by Facebook with Luxottica are already a commercial success today that will help expand a market that does not seem to have slowed down due to Covid.19 and the consequent chip crisis.

According to a Gartner report, global spending on wearables is expected to grow 18% to $ 81.5 billion in 2021 and another 15% in 2022. The biggest boost will come from wearable technology and smart fabrics. Much of this technology already exists in clothing used in the military, medical and sports fields. In common these devices have the ability to capture and process personal data and in some cases, as in the case of Facebook glasses, retrieve and share information protected by the privacy legislation. In addition to being a finally innovative product (they can replace earphones for phone calls and to listen to music) and the result of a collaboration of Made in Italy with foreign big techs, it raises and will raise a very useful debate. Are we interested in being photographed and filmed on the street without us noticing it? How much is my privacy worth today?