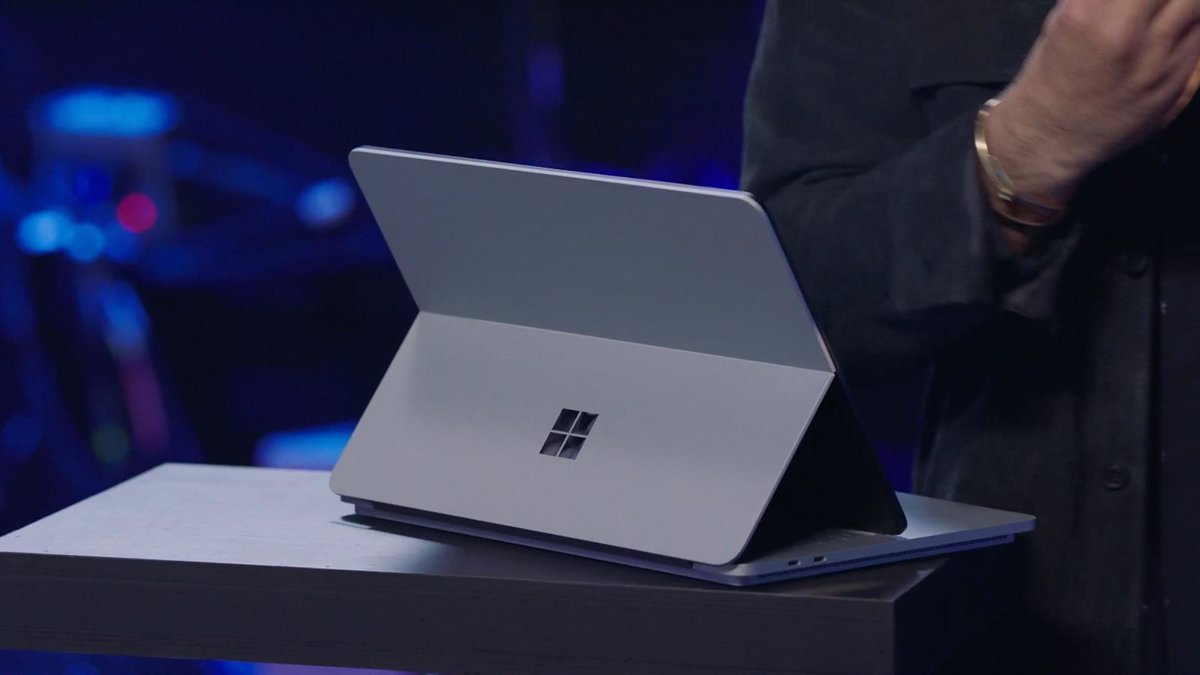 Microsoft has presented this Wednesday the novelties of its family of own Surface devices that arrive together with Windows 11, among which are the new redesigned version of its mobile with dual screen Surface Duo, which improves productivity and the camera, and the new Surface Laptop Studio form factor, professionally designed hybrid between laptop and tablet.

Panos Panay, Microsoft Chief Product Officer, highlighted during the Microsoft Surface Fall 2021 event that “Windows 11 is designed to fit the user”, but that “the hardware completes this experience”, with brands that have already launched compatible products such as HP, Asus, Acer and Dell, among others.

The Surface family now also has its first computers designed to come with Windows 11 where “software and hardware go hand in hand,” according to Panay.

Microsoft has announced at its new event the second generation of its dual.screen mobile Surface Duo, which has been equipped with a Qualcomm Snapdragon 888 processor, support for 5G data and an 8.3.inch screen when unfolded and 90 hertz of refresh rate.

Surface Duo 2 is “a mobile device destined to accompany Windows 11 computers”, and maintains the design of its predecessor with double screen and hinge that closes in the form of a book and oriented to productivity. It also maintains the top and bottom edges.

It has a triple rear camera, composed of a main angle sensor, ultra wide angle and telephoto lens for portraits, and functions such as optical image stabilization.

Surface Duo 2 consists of a 3D glass design manufactured by Corning and stands out for including information on the side of its hinge, such as the time or notifications.

It has the Your Phone app to manage its compatibility with Windows 11 computers, as well as the ability to use Xbox Games Pass with three new video games, including Asphalt 9.

Microsoft has introduced “the most powerful Surface ever,” the Surface Laptop Studio, which combines the professional creator features of the Studio family with the form factor of the Surface notebook computers.

Surface Laptop Studio stands out for its convertible design, which can be used as a conventional laptop and has a hinge with which the screen can be placed outside as if it were a Surface Studio graphics tablet.

The new device is equipped with Nvidia Geforce RTX 3050 Ti graphics, a 14.4.inch screen and 11th generation Intel Core processors, which are accompanied by the Slim Pen 2 stylus with haptic feedback inspired by real pens.

Its features are completed with four Omnisonic speakers with Dolby Atmos and noise cancellation in video calls, and ‘webcam’ with 1080p video resolution and automatic lighting correction.

The professional convertible of the Microsoft family has also received a new model with Surface Pro 8, with 11th generation Intel Core processors, from 16 hours of autonomy, 13.inch touch screen and Thunderbolt 4 port.

Surface Pro 8 offers a revamped thermal design and can achieve up to 75 percent more graphics performance than its predecessor, Surface Pro 7, as well as Dolby Atmos sound.

Its design includes adaptive color technology that adapts the tone to the environment, as well as a new Slim Pen stylus model incorporated into the keyboard that improves precision and includes a sensor to simulate the behavior of a real pen.

The second Surface model presented is the Surface Go 3, a model aimed at remote workers and families. Windows 11 is accompanied in this model with biometric recognition with Windows Hello, as well as Xbox Games Pass.

Surface Go 3 has a 10.8.inch screen with Dolby Audio sound certifications. It is accompanied by a new model of wireless mouse made of recycled plastic from the ocean.

Microsoft has announced its next step to make its products more accessible to people with disabilities, and has announced the Surface Adaptive Kit, an adapter equipped with elements such as high.contrast arrows for the keyboard for the visually impaired.

Surface Adaptive Kit also has an adhesive hook for the case of a laptop that makes it easy to open it with motor limitations.

All of these products will be available on October 5, the date on which the company’s new operating system, Windows 11, will also be released.

Satya Nadella, CEO of Microsoft, has stated that “technology for technology’s sake serves no one”, highlighting its focus on people with disabilities and its commitment to be a neutral company in polluting emissions by 2030.