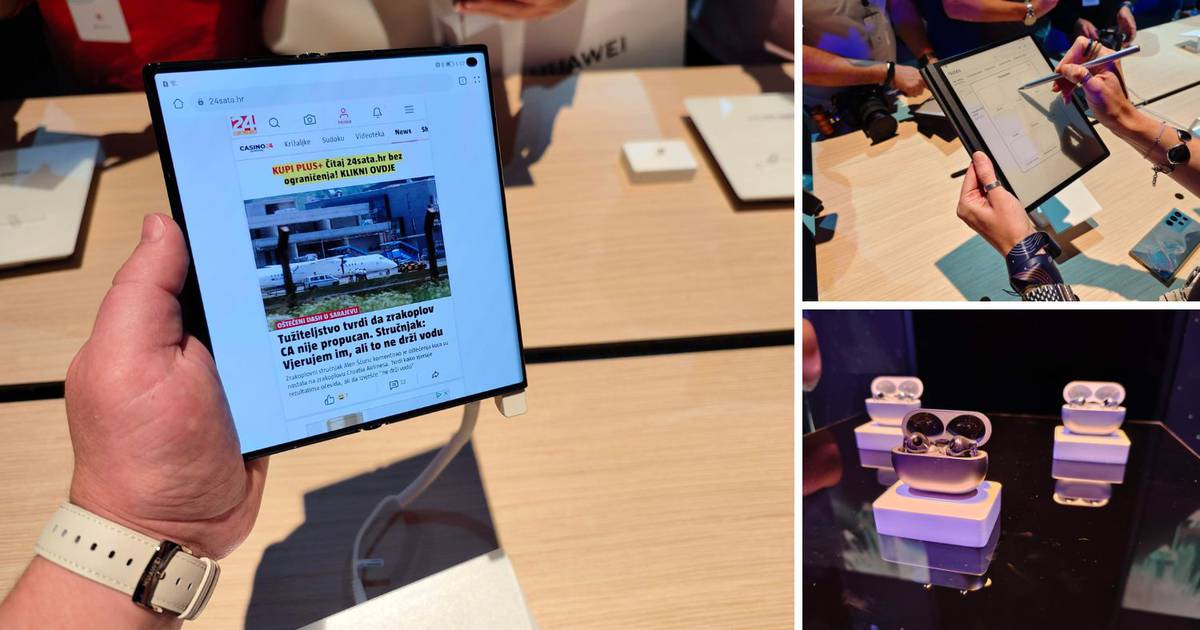 Huawei presented a number of new products in Istanbul and presented a strategy for the upcoming period. From the premiered devices, the new folding phone Mate Xs 2 stands out, but also two MateBoo laptops, D16 and D16s. The Chinese giant also presented MatePad Paper, a tablet with an e-ink screen that we also saw in Barcelona at MWC. Two new mobile phones are coming, the Y70 and Y90, and the successor to the acclaimed headphones – FreeBuds Pro 2.

The company also pointed out that they are developing a product ecosystem in six main areas – smartphones, other smart devices, HMS ecosystem, B2B business, smart car solutions and smart home systems, each area and products within which offer state-of-the-art technology experience. on the intuitive use of artificial intelligence.

– Huawei is committed to continuous innovation and bringing the digital world closer to every person, family and organization. Therefore, we maintain high investments in research and development and marketing for various categories of our products. We want to provide consumers with revolutionary innovations and continuously lead the development of the industry – said Derek Yu, President of Central Eastern Europe, Nordic & Canada, Huawei Consumer Business Group.

Huawei states that they have completed their line of folding devices with the Mate Xs 2, ie they have phones that include models with internal and external screens and a flip phone. The Mate Xs 2 folds outwards, and is additionally thinned, when folded, it is completely flat. Huawei also points out that in addition to the improved opening mechanism, which enabled the phone to work, they also worked on the weight, which is now 255 grams. That is, they compared it to flagship phones and the associated masks.

As for the screen, the diagonal is 7.8 inches when unfolded, a resolution of 2480×2200 pixels, with 120 Hz refresh rate. When closed, the larger screen has a 6.5-inch diagonal and a relatively standard 19: 9 aspect ratio.

The main True-Chroma camera has a 50 megapixel sensor, and it also has a 13 mpx wide-angle camera (f / 2.2) and a telephoto camera with 3x optical zoom and 8 megapixels and optical stabilization. The phone also has a front selfie camera in the corner of the screen, with a resolution of 10.7 megapixels.

Huawei also presented new mid-range smartphones in Istanbul – the new Y70 and the new Y90. Huawei’s new Y70 comes with a 6000 mAh battery, and Huawei says that they should charge the phone twice a week with such a battery. There’s also the Y90, which, they say, charges up to 50 percent in half an hour with a 40W charger.

Huawei states that the two new laptops are intended for those who work remotely or from home, but they lack the classic office setup with a large monitor. Thus both devices have a 16-inch FullVIew display that should allow enough space to work and manage multiple tasks simultaneously.

The MateBook line is powered by a 12th generation Intel® Core ™ H-series processor with a TDP of up to 40 W, dual-channel RAM and an SSD.

They state that they have simplified AI file management to further enable device collaboration and easy file transfer between PC, smartphone and tablet brings freedom of use and availability of the necessary data no matter where they are located. The MateBook 16s comes with processors up to Intel i9, two USB 3.2, HDMI port, Thunderbolt 4, an additional USB C connector and a 3.5mm headphone jack. As for the screen, it is touch sensitive, its format is 3: 2, and like the D16 model, it has a smart webcam that can monitor you while you are on a video call. This D16 model has a 16-inch screen, 16:10 format and as a very good trump card, the numeric part on the keyboard. The 16s will cost 1,699 euros and the D16 899 euros.

In addition to the devices already mentioned, Huawei has launched its first tablet with e-ink – MatePad Paper. This device is said to be perfect for anyone working in the creative industry and appreciating the freedom to work outside the office, but not ready to give up traditional scripts, writing and all those extra experiences that paper writing brings.

Slim and weighing about 360 grams, it is equipped with a 10.3-inch FullView display and the first E Ink display model to receive the TÜV Rheinland Paper Like Display certificate. It will cost 499 euros.

In the audio device category, Huawei has launched FreeBuds Pro 2. These new headphones stand out with the excellent sound quality achieved thanks to the Dual Sound System, Huawei states, and points out that the adoption and integration of two digital-to-analog converters (DAC) chip and quad-magnet dynamic drivers with advanced digital frequency crossover technology, allows the device to distinguish between high and low frequency.

As they beat, along with the high-resolution LDAC codec, the FreeBuds Pro 2 headphones bring the title of the device with the cleanest sound quality in the category. They are equipped, with the premiere in this category, Triple MIC ANC TWS system that provides 15% less noise compared to the previous model, while in certain scenarios they achieve a maximum use of active noise cancellation of 47 dB, according to Huawei.

FreeBuds Pro 2 is also equipped with three dynamic audio listening optimization algorithms that can detect changes in volume, differences in ear canal structure, and changes in wearing status in real time. It will cost 199 euros.

One thought on “Even thinner and firmer, but still expensive: Huawei unveils six new devices with Mate Xs 2”